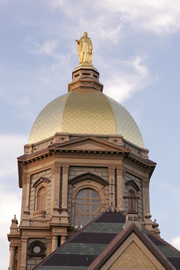 As high school seniors fill out their college applications this fall, they will be able to compare prospective schools online thanks to an increasingly interactive set of institutional rankings eager for their — and their parents’ — attention.

The image they form of Notre Dame may look something like this: A top-rated national research university, rising in international prestige and especially strong in business education; where undergraduate teaching and service learning shaped by Catholic Church teachings are priorities; whose graduates are highly attractive to corporate recruiters and typically make a substantial return on their parents’ tuition investment.

At the same time, other third-party endorsements have praised the University as a “great” employer and spotlighted the surging academic reputation of several doctoral programs and the executive MBA degree.

“We are proud of the significant strengths in our academic and student life programs, and will continue to work to make them among the best in the world,” said Thomas G. Burish, provost. “We work hard to meet the expectations of our students and their parents in providing an education that forms the minds and consciences of tomorrow’s leaders.”

Notre Dame’s Mendoza College of Business was ranked No. 1 in the fifth annual Bloomberg Businessweek evaluation of the 50 best undergraduate business schools in the United States, released earlier this year.

“In a year when unemployment was at the forefront of student concerns, Notre Dame fared well, thanks in part to a large alumni base willing to lend a hand to young job seekers,” Businessweek editor Geoff Gloeckler wrote. Gloeckler’s story also noted the college’s use of Skype video calling services to line up interviews so that companies could save money by not traveling to campus.

The same publication dove deeper in another analysis, scoring business schools based on a survey of seniors who assigned letter grades to their own schools in 12 specialty areas. Mendoza finished first out of 139 participating schools in accounting and ethics and appeared on top 10 lists in six of the 10 other categories: macroeconomics (No. 2), business law (No. 6), calculus (No. 6), financial management (No. 8), microeconomics (No. 9), and sustainability (No. 10).

Taken as a whole, the University placed 63rd in the 2010-11 Times Higher Education (THE) World University Ranking, an effort by the British publication to identify the best universities worldwide. The ranking, which compares learning environments and the volume, income, reputation and influence of faculty research, represents a substantial jump from the University’s ranking (199) under a different methodology last year.

Meanwhile, new assessments of Notre Dame’s graduate and professional programs reflect the University’s efforts to strengthen them. Notre Dame Law School earned a No. 22 ranking in the U.S. News comparison of top law programs. Mendoza’s executive MBA program notched a sixth-place finish in The Wall Street Journal’s survey of eMBA graduates and the firms that employ them.

Select doctoral programs across the Colleges of Arts and Letters, Engineering and Science also showed significant improvement in the complex and long-awaited ranking of doctoral programs released last month by the National Research Council.

“This is the most data intensive assessment of doctoral programs ever completed,” said Gregory E. Sterling, dean of the Graduate School. “It involved 212 universities, 62 fields of study and 5,000 programs. The data came from five surveys, the Institute for Scientific Research and a number of scholarly societies.”

Sterling said Notre Dame’s programs in aerospace engineering, English, history and theology showed the most improvement across the NRC’s pair of regression-based and survey-based rankings. Notre Dame’s humanities departments —English, history, philosophy and theology — and mathematics turned in the strongest relative showing overall, Sterling said. He added that there were some other notable stories, including civil engineering’s performance in the survey ranking and the overall performance of biological sciences, which had been ranked in just separate sub-disciplines in 1995.

While students considering graduate study are likely to comb through the data as they decide where to apply, Sterling said the greatest value may be to academic departments themselves.

“The strength of the ranking is the data that it provides on the 21 variables (analyzed by the NRC),” he said. “It offers individual programs the opportunity to evaluate their contributions and practices in light of their peers on specific points.”

U.S. News & World Report, which publishes the college and university ratings most familiar to American students and parents, placed Notre Dame at No. 19 this year. Notably, the University ranks fourth in undergraduate teaching — behind Dartmouth, Miami University and Princeton — and 17th as a “best value” among national universities. The University also was cited on the publication’s shortlists of schools that offer students a valuable first-year experience and that specialize in formative service learning programs.

Notre Dame graduates’ starting median pay of $54,100 — as tabulated by PayScale, a leading compiler of compensation data — jumps to a mid-career median of $112,000, earning the University eighth place on PayScale’s list of top private research universities by salary potential.

In a slightly different look at tuition and salary data, the company found that while Notre Dame students’ four-year tuition costs added up in 2009 to about $181,900 (not factoring in financial aid), the expected 30-year return on that investment in 2010 dollars amounts to $1,384,000, a 12.1 percent annual return on investment, earning Notre Dame ninth place on PayScale’s list of “Colleges Worth Your Investment.”

Job recruiters find it worth their while to come to Notre Dame, according to a Sept. 13 report in the Wall Street Journal. The University ranks 22nd on the newspaper’s list of Top 25 Recruiter Picks. Lee Svete, director of the University’s Career Center, said that if the ranking had factored its tabulation of graduates hired as a percentage of total student population, Notre Dame would have finished as high as fourth. Perhaps that’s one reason behind Notre Dame’s appearance at No. 7 on The Princeton Review’s list of parents’ “Dream Schools.”

The University also receives high marks from the faculty and staff who work for it, enough to earn Notre Dame recognition two years running in the annual Chronicle of Higher Education survey of “Great Colleges to Work For”.

PayScale: Which Colleges Are Worth Your Investment?

The Chronicle of Higher Education Great Colleges to Work For