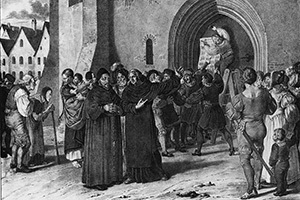 In the third of four gatherings between the University of Notre Dame and Heidelberg University commemorating the 500th anniversary of the Protestant Reformation, scholars from both universities will gather March 12-15 in McKenna Hall to examine the authority and interpretation of the Bible—arguably one of the most disputed topics in the history of ecumenical dialogue.

Multiple Reformations and the Authority and Interpretation of Scripture, co-sponsored by one of the largest faculties of Catholic theology and one of the largest Protestant faculties in the world, will feature seven to 10 theologians from each university along with presentations by Notre Dame English, history and American studies faculty and by faculty from other universities in the United States and Canada.

In addition to discussing the Reformation’s cultural, political and intellectual legacies and investigating potential long-term research collaborations, scholars in these four meetings are examining how this pivotal event contributed to the globalization of Christianity and identifying ways forward for ecumenical scholarship and dialogue.

“In an age of polemics, our model for Christian unity is what Cardinal Walter Kasper calls a ‘reconciled diversity’ in ecumenical dialogue,” said J. Matthew Ashley, associate professor and chair of theology at Notre Dame and co-organizer of the Multiple Reformations series with Jan Stievermann of Heidelberg. “This means we meet, listen, enjoy one another’s company and identify both differences and areas of overlap. This helps us jointly own the complicated shared history of the Reformation and see how we can come to terms with it.”

“Our Catholic mission, after the Second Vatican Council, demands a commitment to ecumenical dialogue, and this is particularly so at Notre Dame, which celebrates the 50th anniversary of sponsorship of the Tantur Ecumenical Institute,” said Rev. John I. Jenkins, C.S.C., the University’s president. “As we commemorate the 500th anniversary of the beginning of the Reformation, we renew our commitment to dialogue, scholarship and prayer that will draw all who share the name of Christian to deeper unity.”

Father Jenkins will address the conference attendees the opening night and will convene the first meeting of a new Tantur Ecumenical Institute Advisory Board later in the week.

This series of conferences is one of several fruits of the 2014 memorandum of understanding signed by Notre Dame and Heidelberg. The first two Multiple Reformations conferences took place at Notre Dame’s Rome Global Gateway and Heidelberg University; the fourth will be held at Tantur Ecumenical Institute in Jerusalem March 11-14, 2018.