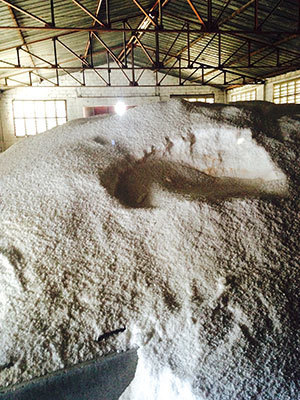 The University of Notre Dame Haiti Program has established a partnership with Carribex S.A., one of the largest food corporations in Haiti, to distribute the program’s Bon Sel Dayiti, co-fortified salt that will reduce preventable disease in Haiti. With Carribex’s nationwide distribution network, the salt is now available to most of Haiti’s 10 million people.

More than 2 million Haitians are infected with lymphatic filariasis, a mosquito-borne disease that is the second leading cause of long-term disfigurement and disability worldwide. The debilitating and socially marginalizing disease, also known as elephantiasis, is carried by mosquitoes. It can be eliminated in Haiti through mass drug administration and the distribution of co-fortified salt. Bon Sel Dayiti contains diethylcarbamazine citrate — the medication that kills the parasitic worms that cause lymphatic filariasis — and potassium iodate, which supplies iodine, an essential nutrient needed for brain development.

Since 2006, the Haiti Program, based in the College of Science at the University of Notre Dame, has produced Bon Sel Dayiti, the only locally produced, food-grade fortified salt in the country.

Earl Carter, assistant dean in the College of Science, has recently been named managing director of the program. The Haiti Program founder and principal investigator, Rev. Thomas Streit, C.S.C., completed a stateside leave, which concluded with teaching duties during the fall semester, and a return to Haiti in mid-January. Father Streit will continue to work closely with Carter; Greg Crawford, dean of the College of Science; and others in support of program development while also leading in-country research efforts.

The strategic partnership with Carribex has increased demand tenfold for Bon Sel Dayiti. Carter said, “To supply the tenfold increase in demand for the salt resulting from this important distribution breakthrough, the Haiti Program recently purchased a shipload of 1,500 tons of raw solar salt from program partner Cargill Salt’s facility on the Caribbean island of Bonaire, N.A. This large re-supply of salt, delivered in early December, will augment the existing stock of local and imported raw salt, and will support the production of Bon Sel Dayiti throughout 2014.”

Carribex S.A. is taking delivery of some 75,000 bags of salt per week in support of sales. The corporation’s nationwide distribution network will take the vital product well beyond the Leogane area where initial distribution efforts were focused.

Founded in 1993, the University of Notre Dame Haiti Program seeks to achieve the ambitious goal of eliminating lymphatic filariasis in Haiti by 2020. The Haiti Program is partnering with the Haitian Ministry of Health, corporations and nongovernmental organizations to eliminate the disease in Haiti and alleviate the suffering of Haitians infected with lymphatic filariasis.