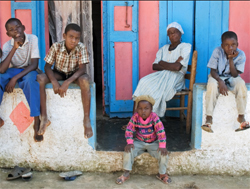 “The Road to Fondwa,” a documentary film that chronicles the stories of Haitian citizens and their engagement with the country’s quest for development, will be screened April 16 at the University of Notre Dame.

The film, which was directed by Justin Brandon, a 2004 Notre Dame graduate and South Bend native, will be shown at 6 p.m. and 8:30 p.m. in the Montgomery Theater of Notre Dame’s LaFortune Student Center. The event is free and open to the public.

The screening celebrates the culmination of a two-year journey undertaken by two 2005 Notre Dame graduates, Dan Scnorr and Brian McElroy, who set out to create a film that captures the struggles and joys of rural Haiti. Schnorr and McElroy were inspired to create the film while living as volunteers at the University of Fondwa in Haiti for a year following their graduation. Brandon became involved in the project as a cameraman and shot the film in Haiti for five weeks the following summer.

Screenings at Notre Dame and Saint Mary’s College will kick off the film’s national university and festival screening tour.

“We are thrilled to be returning to South Bend to screen ‘The Road to Fondwa,’” said Brandon. “This project would never have been possible without the incredible support of the entire South Bend community, and we are looking forward to launching our university and film festival tour at the place where it all began.”

The presentation of “The Road to Fondwa” is sponsored by Notre Dame’s Haiti Working Group, Mendoza College of Business, College of Science and 17 other departments.
For more information, to view the film trailer or to purchase a DVD, visit the official “Road to Fondwa” Web site at http://fondwa.org.