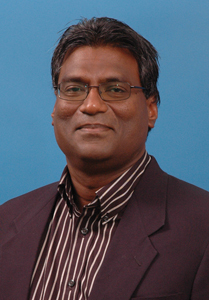 Harindra Joseph S. Fernando has been appointed the Wayne and Diana Murdy Professor of Civil Engineering and Geological Sciences at the University of Notre Dame.

Fernando is an expert in fluid mechanics, specifically in atmospheric and oceanic flows as well as industrial flows involving density variations. His current projects include laboratory experiments and field observations in conjunction with theoretical and computer modeling of urban flows, highlighting the effects of climate change; air flow in mountainous terrain; underwater waves in shelf seas; dynamics and remote sensing of ship and submarine wakes; storage problems in National Petroleum Reserves; flow through nuclear reactors; modeling and measurements of air pollution, including health effects; turbulence in the atmospheric boundary layer; and freeway acoustics. In addition to national agencies, several international sponsors support his work.

At Notre Dame, Fernando plans to focus on environment, energy and sustainability issues and collaborate with a cadre of researchers already on campus working on similar challenges.

He joins the Notre Dame faculty from Arizona State University (ASU), where he most recently served as the director of the Center for Environmental Fluid Dynamics and professor in the Department of Mechanical and Aerospace Engineering, with an appointment in the School of Sustainability. Prior to joining ASU, Fernando was a research fellow at the California Institute of Technology. He also worked as a research assistant at The Johns Hopkins University and as an assistant lecturer at the University of Sri Lanka.

Fernando is the co-editor of the American Geophysical Union Monograph on “Double-Diffusive Convection” and currently is editing the “Handbook of Environmental Fluid Mechanics.” He has published more than 200 papers in international peer reviewed journals and more than 150 papers in refereed conference proceedings. Among the honors he received are the Presidential Young Investigator Award, Rieger Foundation Award for Environmental Sciences and William Mong Lectureship. At the end of 2008, The Arizona Republic named him among the “Tempe Five Who Matter” — which honored five residents who made a notable difference in the life of the city. Fernando was elected to the Academy of Europe in 2009.

Fernando is a fellow of the American Physical Society, American Society of Mechanical Engineers and American Meteorological Society. He also is a member of the American Geophysical Union, American Society for Engineering Education and European Mechanics Society (EUROMECH).
In addition to his teaching and research activities, Fernando currently serves on the editorial boards of several international journals, including Applied Mechanics Reviews, Journal of Environmental Fluid Dynamics, Journal of Hydro-environmental Research, Journal of Theoretical and Computational Fluid Dynamics and Advances, and Applications of Fluid Mechanics. He also serves in numerous national and international committees dealing with natural disasters, environmental pollution and sustainability.

Fernando earned his doctorate in 1983 and his master’s in 1982 in fluid mechanics from The Johns Hopkins University and his bachelor’s degree, in mechanical engineering, from the University of Sri Lanka in 1979.