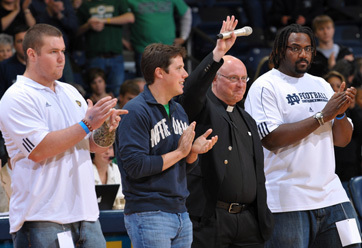 Fundraising efforts held in conjunction with two University of Notre Dame home basketball games have resulted in more than $250,000 in donations that will go toward relief efforts in Haiti in the aftermath of the devastating earthquake that hit the island nation on Jan. 12.

Through the generosity of fans and alumni, as well as contributions from the University and the Notre Dame Monogram Club, the money was raised at the men’s and women’s basketball games that were played Jan. 23 and 24, respectively, in Notre Dame’s Purcell Pavilion.

Notre Dame donated full gate receipts and net concession revenue from both games to the relief effort. In addition, a collection organized by the Notre Dame Student-Athlete Advisory Council raised more than $25,000 from fans and alumni who contributed during the games. The Monogram Club added a $10,000 matching gift to the student total.

Money raised will benefit short-term needs and long-term rebuilding efforts in Haiti and will be distributed to the Notre Dame Haiti Program, which works to eradicate the debilitating mosquito-borne disease lymphatic filariasis; the Congregation of Holy Cross, which has served in Haiti since 1944 and was heavily affected by the earthquake; and Catholic Relief Services, the international humanitarian agency of the Catholic community in the United States.

Information about Notre Dame’s response to the Haiti earthquake, including ways to contribute to the relief effort, is available on the Web at http://haitidisaster.nd.edu.