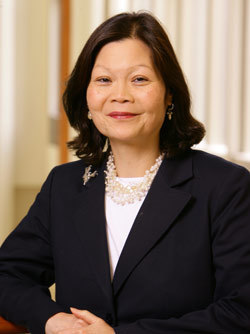 Carolyn Y. Woo, Martin J. Gillen Dean of the Mendoza College of Business at the University of Notre Dame, received an honorary doctoral degree from Lewis University during the school’s undergraduate commencement ceremony on Dec. 19.

Located in Romeoville, Ill., Lewis University is a comprehensive, Catholic university that enrolls about 6,100 students and employs 200 full-time faculty members. It offers more than 80 undergraduate majors and programs of study, as well as 25 graduate degree programs and certificates of advanced study. Lewis, founded in 1932, is one of many schools sponsored by the De La Salle Christian Brothers, an international Roman Catholic teaching order, with more than 320 years of teaching experience in the Lasallian tradition. Brother James Gaffney, FSC, serves as president of the university.

Woo assumed the deanship in 1997 of the Mendoza College, which is ranked No. 1 for its undergraduate business program and ethics curriculum. She serves on the boards of six publically traded firms, as well as Catholic Charities USA, University of Notre Dame Australia and the University of Portland. Woo recently concluded six years of service on the board of Catholic Relief Services.