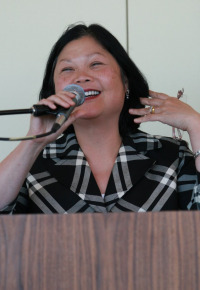 Carolyn Y. Woo, Martin J. Gillen Dean of the Mendoza College of Business at the University of Notre Dame, served this week as a keynote speaker, along with professors Hans Küng and Jeffrey Sachs, at a high-level United Nations symposium dedicated to establishing business ethics in the global marketplace.

“The current economic crisis emphasized the need for a broad consensus on business ethics worldwide,” Woo said. “Efforts such as this event hosted by the United Nations, which brings together key global players, are critical if business is to be a force for good that improves the way of life for the human community.”

The symposium was jointly organized by the Swiss Mission to the U.N., the U.N. Global
Compact Office, the Novartis Foundation for Sustainable Development, and the Global Ethic
Foundation. It included practitioners from the business, science and diplomatic communities.

The manifesto, development of which was led by Swiss-German theologian Küng, the president of the Global Ethic Foundation, aims at laying out a “common fundamental vision of what is legitimate, just and fair” in economic activities. First signatories include former President of Ireland and former U.N. Human Rights Commissioner Mary Robinson; Sachs, director of the Earth Institute at Columbia University; and Nobel Peace Prize Laureate Desmond Tutu, Anglican Archbishop emeritus of Cape Town, South Africa.

The document will be open for signature to individuals globally. Signatories of the manifesto commit to “being led by its letter and its spirit in their day-to-day economic decisions, actions and general behavior.”

Building on the 1993 Parliament of World Religions’ “Declaration Towards a Global Ethic,” the manifesto outlines five universally acceptable principles and values: the principle of humanity; non-violence and respect for life; justice and solidarity; honesty and tolerance; and mutual esteem and partnership.

“The call for an ethical framework for the global financial markets and global economics has loudly been heard from many sides worldwide since the beginning of the current crisis,” said Küng. “This new Declaration on a Global Economic Ethic reminds all stakeholders in global businesses of their individual responsibilities for humanizing the functioning of the global economy: globalization needs a Global Ethic.”

“Any organization’s capacity to adhere to universal values ultimately depends on the willingness of individuals to adopt a personal ethic that guides their own decision-making in all areas of life,” said Georg Kell, executive director of the U.N. Global Compact. “The Global Economic Ethic introduced by Dr. Küng forges an important link between individual and organizational responsibility.”