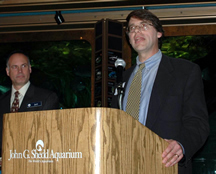 We are so pleased to partner with the Shedd Aquarium,said David Lodge, a Notre Dame professor of biological sciences and the leader of the multi-university National Science Foundation-funded Integrated Systems for Invasive Species (ISIS).Our team of scientists and economists is working hard to provide understanding and solutions to invasive species problems. Shedd Aquarium has the unparalleled ability to show the public the wonderful resources of theGreat Lakes, to display the invasive species that so threaten those resources, and to illustrate how the public can help solve these problems. Shedd has done a wonderful job of collaborating with us and others to turn ideas and discoveries into a fun and effective exhibit.

Non-native species are species that humans have introduced outside their normal distribution. Once they arrive in their new environment, some of these species threaten valued environmental, agricultural or personal resources and are termed invasive species. Scientists believe at least 170 aquatic non-native species currently live in theGreat Lakesand a new species is discovered, on average, once every eight months.

Species from elsewhere in the world, a small proportion of which are now on display at the Shedd, have transformed theGreat Lakesfood web from top to bottom,Lodge said.Canadaand theU.S.together spend about $16 million annually to reduce the damage done by one species, sea lamprey, on trout and salmon at the top of the food web. The bottom of the food web, in turn, suffers from round gobies, zebra mussels and many other invasive species.

And the damages are far reaching, from the shoreline pipes of power plants clogged by zebra mussels to many other lakes and rivers across the continent, as many species spread from theGreat Lakes. The damages to industry from zebra mussel alone currently approach $200 million annually and are growing as zebra mussels continue to spread.

The new $140,000 permanent exhibit, located in the Shedds Local Waters Gallery, offers visitors close-up looks at such live invasive species as Asian Carp, a snakehead, round gobies, alewives and rusty crayfish, among others. The zebra mussels, however, are models, testament to their already notorious reputation in theGreat Lakes. Exhibit planners feared they would be unable to feed the real versions of the voracious eaters, and even if they could, the mussels would multiply rapidly and likely clog the aquariums pipes.

The exhibit also is designed to educate visitors on how invasive species arrive in theGreat Lakesregion and provide them with tips to help prevent their spread. Some invasive species travel to theGreat Lakesin the ballast water of cargo ships, others are emptied from fishing bait buckets, while others have been dumped in sewers or lakes by owners who have tired of caring for exotic animals or plants.

For invasive species then, it is especially true that an ounce of prevention really is worth a pound of cure. And were not really talking ounces and poundswere talking thousands of dollars to prevent invasions, but millions and billions of dollars of losses if we dont.

Despite their troublesome reputation, the invasive species in the exhibit offer fascinating viewing, according to Lodge.

This beautiful new exhibit makes clear that bighead carp, snakehead, and zebra mussels are fascinating creatures,he said.They are not inherently bad; rather they are just in the wrong place.

And after all, such beloved Great Lakes natives as bluegills, bass and sunfish are considered invasive species in theFar East.