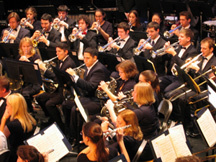 The University of Notre Dame Band program will present three spring concerts Sunday to Tuesday (April 25 to 27). All events are free and open to the public and no tickets are required.p. Sunday (April 25) – The Brass Ensemble and University Band will perform at 3 p.m. in the Main Building under the Golden Dome. The Brass Ensemble will first perform selections from Wagner, Sibelius and Giovannini, followed by the University Band, which will present traditional and modern concert band music, including works by Sousa, Holsinger, Chance and Gershwin.p. Monday (April 26) – The Symphonic Band and Symphonic Winds will present their spring concert at 8 p.m. in Washington Hall. The performance will feature works from modern concert band literature by such composers as de Meij, Bernstein, Tichelli and Holsinger. The concert also will include a solo performance by graduate music student Logan Biles on alto saxophone.p. Tuesday (April 27) – The Notre Dame Jazz Bands and Percussion Ensemble will perform at 8 p.m. in the Notre Dame Band Building. The jazz bands will first perform music ranging from traditional swing standards to contemporary selections and vocal arrangements, after which the Percussion Ensemble will perform an energetic selection of music exploring the sounds of both battery and keyboard percussion.