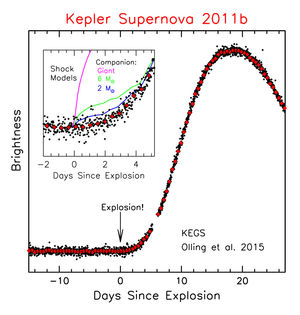 It is one of the fundamental questions that remain unanswered in astrophysics: What are the progenitor stars of a “type Ia” supernovae? A new paper in the journal Nature by University of Notre Dame astrophysicist Peter Garnavich and a team of researchers describes how they used the Kepler Space Telescope to catch three stars in the act of exploding. The results shed light on which stars generate these energetic outbursts.

“This type of supernova has been used to measure cosmological parameters and discover the accelerating universe,” Garnavich said. “We know that type Ia supernovae are dense, dead cores of stars like our sun called white dwarfs. But white dwarfs are very stable and need to have matter added to them to become unstable bombs. This can be done in two ways — either two white dwarfs combine to explode, called the ‘DD scenario,’ or a white dwarf takes mass from a normal star and reaches a critical mass to explode, called the ‘SD scenario.’”

Garnavich pointed out that one difference between these two possible models is that in the SD model there is a normal star sitting next to the exploding white dwarf, while in the DD channel there is nothing.

“We expect to see evidence of the normal star in the first hours to days after the explosion as the debris hits it and a shock wave is formed,” he said. “If the white dwarfs combine to form one star before exploding, then we should not see the shock.”

Garnavich and his fellow researchers decided that the Kepler Space Telescope, which was originally designed to look for planets, could also be used to study supernovae. They used Kepler to continuously stare at several hundred galaxies waiting for a star to explode.

“We thought that Kepler could also stare at galaxies, and we would wait for something to explode,” Garnavich said. “So for three years we had Kepler take images of 500 galaxies every 30 minutes. It’s up in space, so it can take images daytime and nighttime while down here the sun and Earth always get in the way.

“Each galaxy has about 100 billion stars, so Kepler was continuously watching 50 trillion stars for three years. We saw three of those stars explode as type Ia supernovae. And the best thing is that we watched the stars before they exploded and caught the supernova ‘in the act.’”

The Kepler observations provided the researchers with new insights into how supernovae explode.

“Our observations with Kepler allowed us to continuously monitor three type Ia supernovae, and we did not see evidence for a shock, a donor star, in the early light curve,” Garnavich said. “So our results favor the DD scenario in which two white dwarfs combine into one before explosion.”

The “KEGS” team is an international collaboration including members from the University of Maryland, Johns Hopkins and the Australian National University. KEGS is short for Kepler ExtraGalactic Survey. The team’s results, which were outlined in a paper in this week’s edition of Nature, could lead to a change in the prevailing view of the progenitor stars of type Ia supernovae.

“A few years ago most astrophysicists thought he SD progenitor scenario was the correct one," Garnavich said. “Now the DD model has become more accepted and our result support that shift. In the end I think we may have to admit that type Ia explosions come from both models.”