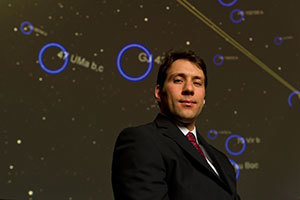 Researchers for the first time have identified Earth-sized planets within the habitable zone of a Sun-like star. Images of the star taken by University of Notre Dame astrophysicist Justin Crepp rule out alternative explanations of the data, confirming that five planets orbit Kepler-62, with two located in the habitable zone. The results were published in Science magazine today.

“A five-planet system with planets of 1.41 and 1.61 Earth-radii in the habitable zone of a K2V star has been detected with the Kepler spacecraft and validated with high statistical confidence,” the paper reports. Those two, named Kepler-62 e and f, are the outermost of the five observed planets and receive a solar flux from the star similar to that received from the Sun by Venus and Mars. Their size suggests that they are either rocky, like Earth, or composed mostly of solid water. A planet discovered more than a year ago in the habitable zone of another Sun-like star, Kepler-22, has a radius 2.4 times the radius of Earth, leaving researchers less sure of its composition.

“From what we can tell, from their radius and orbital period, these are the most similar objects to Earth that we have found yet,” said Crepp, the Freimann Assistant Professor of Physics. Data from the Kepler mission, launched in 2009 to identify extrasolar planets, have so far resulted in several dozen of some 3,000 “Kepler Objects of Interest” having been studied in detail.

Researchers use fluctuations in the brightness of a star to identify the presence of a potential planet whose transit periodically dims the light of the star. Crepp uses large ground-based telescopes to image the host star and analyzes the system to make sure other astronomical phenomena, such as nearby eclipsing binary stars, are not causing the fluctuation, a common “false positive” encountered in the research. Crepp noticed a faint dot near Kepler-62 a year ago, leading to months of detailed study to confirm the planet interpretation.

“What really helped is that this star has five planets,” he said. “You can mimic one planet with another event, but when you have five of them and they’re all periodic, that helps to put the nail in the coffin. It’s hard to make that kind of signature with anything else that you can dream up.”