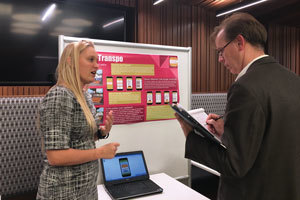 Have you ever had an idea for a great app and wished it existed, or even wanted to create it yourself? The Notre Dame App Challenge, currently underway, asked that question of ND students, faculty and staff. The App Challenge was created as a sequel to last year’s successful VisitND Challenge that engaged students to create mobile campus tours. It was inspired by a similar competition held annually at the University of Chicago.

This unique challenge invited people from across Notre Dame to create mobile apps that answer a call-to-action from University President Rev. John I. Jenkins, C.S.C., in 2011: “I now ask all of you to join me in supporting these collaborative efforts to advance our vision of Notre Dame as a powerful force to heal, unify and enlighten our world.”

The App Challenge was divided into three rounds. Round 1 launched in September 2016. Interested individuals formed teams and submitted their app ideas; more than 85 app ideas were received from across campus. A judging committee comprised of campus leaders then reviewed the ideas and selected 23 to advance to Round 2, which began in early October. During this round, each team was tasked with creating an “app blueprint” containing everything needed to create the app, including basic designs of how the app looks and works, plans on how information would be safely managed, and identifying and understanding how likely users of the app could best be served.

Three huddle sessions were also held, giving each team one-on-one time with subject matter experts in user interfaces and user experiences, information security and technical feasibility. Teams were also allowed to partner with faculty mentors and receive further guidance. Round 2 culminated with Poster Day on Friday, Dec. 2, at the newly opened Scholars Lounge in Hesburgh Library. This event was an opportunity for the public to learn about the apps in Round 2, and provided a final opportunity for each team to receive public feedback on their app ideas and make any final tweaks before submitting their final app ideas on Sunday, Dec. 4. These teams each received a $100 award.

On Dec. 14, the judges announced that four finalist teams had advanced to Round 3. Those teams and their app ideas are:

Starting in January, each team was paired with a student app developer who is helping bring their apps to life. These apps will then be presented to the judges and the public Wednesday, March 29 from 4 to 6 p.m. in Jordan Auditorium. The judges will make their selections at the event, awarding the winning team a $7,500 grand prize; second place will receive $2,000, and third place will receive $1,000.

The App Challenge is sponsored by the Office of the Executive Vice President, and organized by staff from SAP, Innovation Park at Notre Dame and the Office of Information Technologies. The judges and subject matter experts represent over a dozen departments and offices across campus. Co-organizer Matt Willmore, mobileND program manager in the Office of Information Technologies, saw this challenge as an opportunity for anyone with an app idea to compete, win and be exposed to the process of creating a great app. “The teams that advanced to Round 2 received firsthand knowledge and guidance on building and refining their app idea,” said Willmore. “They’ve all completed what is often the hardest part of creating a new mobile app. We’re also confident more apps will come to market than just those advancing to the final round, and are very excited to see that happen.”

More information on the App Challenge can be found at mobile.nd.edu/appchallenge.