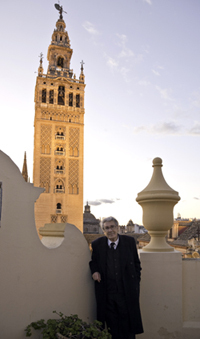 Rafael Manzano Martos, a Spanish architect known for his distinctive use of the Mudéjar style, will receive the 2010 Richard H. Driehaus Prize for Classical Architecture at a ceremony March 27 in Chicago.

The $200,000 Driehaus Prize, presented annually to a distinguished classical architect, represents the largest recognition of classicism in the contemporary built environment. In conjunction with the Driehaus Prize, legendary Yale professor and preservationist Vincent J. Scully will receive the $50,000 Henry Hope Reed Award.

Manzano’s work spans cultures. Mudéjar emerged as a style blending Muslim and Christian influences in the 12th century on the Iberian Peninsula. With expertise in this style and a command of the Western and Islamic vernaculars, Manzano has designed hotels and other commercial buildings, along with homes and residential complexes throughout Spain and the Middle East. His best-known work includes state homes for Chueca Goitia in Seville and Curro Romero in Marbella (now a Julio Iglasias property). His fluency in Islamic style is evident in his designs for a hotel in Mosul, Iraq, and a hotel resort and shopping district in Riyadh, Saudi Arabia. A manor house for Faisal Hassan Jawal in Bahrain currently is under construction.

Born in Cádiz, Spain, in 1936, Manzano received his doctoral degree from the Architecture School of Madrid in 1963. His career has included building restoration, urban planning and teaching, in addition to his architectural work. From 1970 to 1991, Manzano served as the director-curator and governor of the Alcázar of Seville, a royal palace. Originally a Moorish fort, the Alcázar is one of the best remaining examples of Mudéjar architecture. While in this role, Manzano restored the al-Muwarak Domestic Palace, the residence of al-Mutamid in Seville, on the premises of the Casa de la Contratación (House of Trade). The Casa, which dealt with legal disputes on trade with the Americas, includes a chapel where Christopher Columbus met with Ferdinand and Isabella after his second voyage. Today Manzano teaches at the Seville Superior Technical School of Architecture.

Henry Hope Reed Award laureate Vincent J. Scully enrolled at Yale at age 16, beginning an association that has endured for more than 70 years. Scully, Yale’s Sterling Professor Emeritus of the History of Art, has become a university icon. One of its most popular and influential lecturers, Scully is a champion of architectural preservation. Since the “urban renewal” efforts of the 1960s and 70s, he has condemned sprawl and advocated livable and sustainable urban design. The author of more than 20 books, Scully is a trustee emeritus of the National Trust for Historic Preservation and a recipient of the National Medal of Arts, the highest honor the U.S. bestows on artists and patrons.

Established in 2003 through the University of Notre Dame School of Architecture, the Richard H. Driehaus Prize honors the best practitioners of traditional, classical and sustainable architecture and urbanism in the modern world. The Henry Hope Reed Award recognizes achievement in the promotion and preservation of those ideals among people who work outside the architecture field. Together, with the $200,000 Driehaus Prize, the $50,000 Reed Award represents the most significant recognition for classicism in the contemporary built environment.

For more information on the Driehaus Prize, please visit www.architecture.nd.edu/driehausprize on the Web.