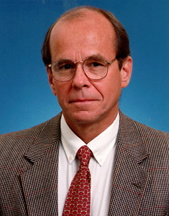 K. Barry Sharpless, the co-recipient of the 2001 Nobel Prize in chemistry, will present the inaugural Jeremiah P. Freeman Organic Synthesis Lecture at4 p.m.Thursday (April 6) in Room 127 of Nieuwland Hall at the University of Notre Dame.

The lecture, which is free and open to the public, honors Freeman, a Notre Dame professor emeritus of chemistry and biochemistry and 25-year secretary of Organic Synthesis Inc., a publication that provides the organic chemistry community with detailed experimental methods in a standard format for the synthesis of organic compounds.

Sharpless, W.M. Keck Professor of Chemistry at the Scripps Research Institute inLaJolla,Calif., received the Nobel Prize for his innovative contributions to the development of broadly useful and commercially viable catalytic oxidation chemistry for the selective production of bioactive chiral molecules with the proper right or lefthandedness.

Chirality, or handedness, is the structural characteristic of a molecule that makes it impossible to superimpose it on its mirror image. Proteins, DNA and carbohydrates are all chiral molecules. Without the correct handedness, they will not function as the basic molecules of life. Many drugs also must be of the correct chirality. In some cases, the wrong handedness can be toxic.

Freeman was graduated from Notre Dame and earned masters and doctoral degrees from theUniversityofIllinois. He began his career with the chemistry group of the Redstone Arsenal Research Division of the Rohm and Hass Company, before returning to Notre Dame in 1964 to join the organic chemistry faculty. He served as chair of the Department of Chemistry and Biochemistry from 1970 to 1979.

Freemans research interests were centered in the area of organic nitrogen compounds, particularly those containing nitrogen in intermediate oxidation states, such as nitrones nitrimines, and nitroso compounds.

He was elected secretary of Organic Synthesis Inc. in 1979 and served in that capacity until 2004, during which time he edited four of the publications five-year collective volumes and assembled a cumulative index of the first eight volumes.