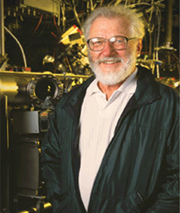 Herbert Kroemer, recipient of the 2000 Nobel Prize in Physics for “developing semiconductor heterostructures used in high-speed and opto-electronics,” will present the inaugural lecture of the James and Rose-Marie Merz Lecture Series at 3:30 p.m. Thursday (Sept. 9) in McKenna Hall at the University of Notre Dame. Titled “Negative Optical Refraction: What is the Fuss all About?,” the lecture is free and open to the public. A reception for Kroemer will precede the lecture at 3 p.m. in the atrium of McKenna Hall.p. Kroemer, the Donald W. Whittier Chair of Electrical and Computer Engineering and professor of materials at the University of California at Santa Barbara (UCSB), has worked in a number of research laboratories in Germany and the United States, including Phillips, RCA and Varian. In addition to his distinction as a Nobel Laureate, he is a member of the National Academy of Engineering and received the Medal of Honor from the Institute of Electrical and Electronics Engineers (IEEE).p. Acknowledged as a pioneer in molecular beam technology, Kroemer joined the faculty at UCSB in 1976 in order to focus its semiconductor research program on the emerging compound semiconductor technology rather than on mainstream silicon technology. This led to the development of a research group at UCSB that is internationally regarded in the physics and technology of compound semiconductors. His topic for the inaugural Merz Lecture suggests another promising alternative to current technology.p. The James and Rose-Marie Merz Lecture Series was established and endowed by the Universitys Graduate and Research Advisory Council in October 2001 in recognition of the outstanding contributions made to the University by James Merz, vice president for graduate studies and research from 1996 to 2001.p. Merz, who stepped down as vice president in June 2001, is the Frank M. Freimann Professor of Electrical Engineering and concurrent professor of physics. Specializing in optical spectroscopy of semiconductor nanostructures, his current research interests include the optical properties of semiconductors, defects in solids, phototonic devices and circuits, and low-dimensional quantum structures (i.e, nanosctructures).p. Merz was on the UCSB faculty with Kroemer for the 16 years prior to coming to Notre Dame in 1994.p. He has served as a Fulbright Fellow, a Woodrow Wilson Foundation Fellow, a Danforth Foundation Fellow, an IEEE Fellow, an American Physical Society Fellow, a visiting professor in Japan and Switzerland, and was selected as a distinguished research lecturer in China by the National Academy of Science and Chinese Academica Sineca. He has received an honorary doctorate from Swedens Linköping University, the IEEE Third Millennium Medal, and the Alexander von Humboldt Research Award for Senior U.S. Scientists.p. The author of more than 450 papers, two book chapters, one book review and the holder of five patents, Merz is a member of the American Association for the Advancement of Science, the Materials Research Society, Sigma Xi, Eta Kappa Nu and the Society for Values in Higher Education.p. Merz, a 1959 Notre Dame graduate, and his wife, Rose-Marie, have four adopted children and seven grandchildren.p.