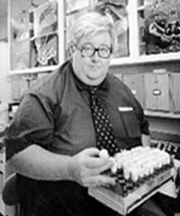 Robert W. Gwadz, a chief researcher at the National Institute of Allergy and Infectious Diseases (NIAID), will present the inaugural lectures of the George B. Craig Jr. Memorial Lecture Series on Oct. 7 and 8 (Thursday and Friday) at the University of Notre Dame.p. Gwadzs opening lecture, “Legacy of George B. Craig in One Students Meandering Road Through Medical Entomology,” will be presented at 4 p.m. Thursday in Room 283 of the Galvin Life Sciences Center.p. His second lecture, “Science as a Political Tool in a Troubled Word,” is scheduled for 12:45 p.m. Friday, also in 283 Galvin.p. Both presentations are free and open to the public.p. The series honors the late George B. Craig Jr., an internationally known medical entomologist and Notre Dames Clark Professor of Biology.p. Gwadz, head of the International Research Unit and assistant chief of the Laboratory of Malaria and Vector Research at NIAID, earned his bachelor of science degree from Notre Dame in 1962 while working in the laboratory of biologist Kenyon Tweedel. He developed a relationship with Craig while taking courses in entomology and parasitology and maintained this relationship by correspondence while serving a four- year tour of duty as a line officer in the U.S. Navy. In 1966, he returned to Craigs laboratory as a graduate student and completed his doctorate with research on the neuro-hormonal regulation of sexual receptivity in female mosquitoes.p. Gwadz has worked in a variety of areas related to mosquitoes that transmit human pathogens. He is the author of a series of seminal papers describing the hormonal regulation of mating behavior, blood-feeding and egg-development in mosquitoes. He also has published the first in a series of reports that demonstrate the feasibility of producing a transmission-blocking malaria vaccine based on molecules unique to the sexual stages of the malaria parasite.p. Since the late 1980s, Gwadz has worked in partnership with scientists and physicians at the National School of Medicine of Mali to establish the Malaria Research and Training Center in Bamasko, Mali. He is currently head of the NIAID unit that works with the center on a variety of clinical and research programs.p. Craig, who died in 1995, spent his entire academic career at Notre Dame, joining the faculty in 1957 as an assistant professor and director of the Vector Biology Laboratory. He established a world-renowned research program in mosquito biology and genetics at the University, serving as advisor to 40 graduate students and 39 postdoctoral fellows, with whom he published more than 500 scientific papers. He also was a passionate teacher and mentor to countless undergraduate students.p. From the mid-1950s until 1975, Craig studied the genetics of Aedes aegypti, demonstrating the genetic basis of traits central to the understanding of disease transmission and mosquito control. Under his direction, Notre Dame-affiliated scientists carried out some 80 percent of all genetic research on Aedes aegypti.p. By the late 1960s, Craig and his associates began work in the reproductive physiology of mosquitoes, leading to the discoveries that sexual receptivity in female mosquitoes is hormonally based and that the quantity of blood ingested by mosquitoes is determined by the neural system.p. After the arrival in the United States of the Asian tiger mosquito (Aedes albopictus), Craig feared it as a more effective transmitter of disease than native species and expanded his research to include this new menace to public health.p. Recipient of numerous awards and honors during his career at Notre Dame, Craig was honored by the Entomological Society of America in 1975 with its first Distinguished Teaching Award, received the Hoogstrahal Medal from the American Committee for Medical Entomology, and in 1983 became the first Notre Dame faculty member to be elected to the prestigious National Academy of Sciences.p. Craigs former students occupy prominent positions in universities and laboratories throughout the country.p. The George B. Craig Jr. Memorial Lecture Series is funded, in part, by an endowment established from contributions donated in his memory.p.