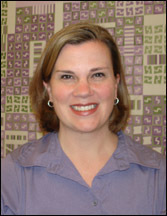 Julie Hail Flory, formerly assistant director of news and information at the University of Notre Dame, has been promoted to associate director, effective May 1.

A member of the Office of News and Information staff since 2000, Flory has worked primarily as a media liaison and writer, focusing largely on the fine and performing arts, the School of Architecture and student activities and accomplishments.

Flory also has served as the primary video producer for the Office of Public Affairs and Communication and has overseen projects related to the inauguration of Notre Dames president, John I. Jenkins, C.S.C., in 2005, and last years beatification of Blessed Father Basil Moreau, founder of the Congregation of Holy Cross, Notre Dames founding religious community. She also has played a key role in the production of the Universitys institutional television announcements, including promotional segments produced by NBC for Notre Dame football broadcasts.

In her new position, Flory will assign and edit stories, manage the news components of the University home page and the news and information Web site, and assist with the creation and delivery of institutional messages.

A graduate of San Jose State University with a bachelors degree in radio-television journalism, Flory previously worked as a television news reporter at WSBT-TV in South Bend, as well as at stations in Idaho and Colorado. She also worked for NBC in Washington D.C., where she served as assistant producer for Dateline NBC investigative segments and as a staff assistant for Today and NBC Nightly News.