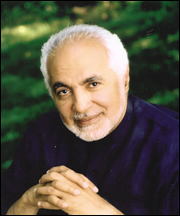 Imam Feisal Abdul Rauf, founder and chief executive officer of the American Society for Muslim Advancement (ASMA) and imam ofNew York Citys largest mosque, has been added as a panelist for the Notre Dame Forum next Thursday (Sept. 22).

A previously announced panelist, Prince El Hassan bin Talal of Jordan, is unable to attend due to government obligations inJordan.

The inaugural Notre Dame Forum will begin at2 p.m.in theJoyceCenterarena and is the academic centerpiece of the inauguration of the Universitys new president, Rev. John I. Jenkins, C.S.C.

Imam Feisal leads Masjid Al-Farah, a mosque inManhattan. He has dedicated his life to building bridges between Muslims and the West and is a leader in the effort to build religious pluralism and integrate Islam into modern American society. He founded ASMA in 1997 as the first American organization committed to bringing Muslims and non-Muslims together through programs in culture, art, academia and current affairs.

Imam Feisal has been a tireless advocate for an ecumenical solution to the Israeli-Palestinian conflict and is the architect of the Cordoba Initiative, an interreligious blueprint for improving relations between America and the Muslim world and pursuing Middle East peace.