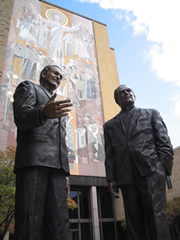 A new statue on the University of Notre Dame campus honors the leadership and friendship of Rev. Theodore M. Hesburgh, C.S.C., and the late Rev. Edmund P. Joyce, C.S.C., president and executive vice president of the University, respectively, from 1952 to 1987.

Presented to Notre Dame on behalf of the 50th reunion of the University’s Class of 1953, the statue is located on the south side of the Hesburgh Library between the building and the reflecting pool. It will be formally dedicated Saturday (Oct. 22) at 9:45 a.m., at a ceremony to include a blessing from Notre Dame’s president, Rev. John I. Jenkins, C.S.C., and remarks from a representative of the Class of 1953, the first class to graduate under the leadership of Fathers Hesburgh and Joyce.

The statue, which was cast in bronze by artist Lou Cella of the Fine Art Studio of Rotblatt Amrany, depicts the two priests engaged in conversation and features a quote from each on its granite base. The sculptures are larger-than-life, with Father Hesburgh standing 7 feet tall and Father Joyce measuring 7-feet-4-inches in height.

Father Hesburgh has played an active and influential role in national and international affairs over the past half century. He has held 16 presidential appointments that involved him in virtually all major social issuesincluding civil rights, peaceful uses of atomic energy, campus unrest, treatment of Vietnam offenders, and Third World development and immigration reform. Justice was the focus of many of his outside involvements. Perhaps most notably, he was appointed a charter member of the U.S. Commission on Civil Rights in 1957 and chaired it from 1969 to 1972.

Father Hesburgh is the recipient of 150 honorary degrees, the most ever awarded to one person.He was awarded the Congressional Gold Medal, the highest honorpresented by the U.S. Congress, in 2000, and was honored in 1964 with the Medal of Freedom, the nations highest civilian honor.

Father Joyce retired in 1987 after serving 35 years as the chief financial officer of Notre Dame during Father Hesburgh’s presidency. The two priests took a long vacation immediately after their retirements, and Father Hesburgh wrote about the adventure and their friendship in his 1992 book “Travels with Ted & Ned.”

For many years, Father Joyce was an influential voice in the National Collegiate Athletic Association, particularly in matters dealing with the educational integrity of intercollegiate athletic programs. He also was instrumental in the formation of the College Football Association and served that organization as secretary-treasurer. The National Football Foundation honored Father Joyce with its Distinguished American Award. There are three endowed chairs established in his name at Notre Dame, and the University’s Athletic andConvocationCenteris named in his honor.