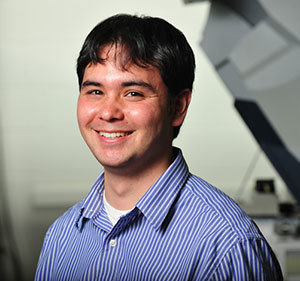 Though not often considered beyond the plasma television, small-scale microplasmas have great utility in a wide variety of applications. Recently, new developments have begun to capitalize on how these microplasmas interact with liquids in applications ranging from killing bacteria for sterilizing a surface to rapidly synthesizing nanoparticles.

An interdisciplinary collaboration between researchers at Case Western Reserve University and the University of Notre Dame has revealed a critical interaction that is occurring at this plasma-liquid interface in that the electrons in plasma actually serve to separate water, producing hydrogen gas.

In a paper set to appear as a Fast Track Communication in the Journal of Physics D: Applied Physics, David B. Go, assistant professor of aerospace and mechanical engineering at Notre Dame, and his graduate student Paul Rumbach teamed with R. Mohan Sankaran, associate professor of chemical engineering at Case Western Reserve, and his undergraduate student Megan Witzke to describe a series of experiments that revealed this new chemistry.

A plasma is an ionized gas, consisting of not only neutral gas molecules but also free electrons and charged ions. Though often thought of as very hot, microplasmas are a unique regime of plasmas that can be formed at atmospheric pressure and are considered “cold plasmas” because they are typically around room temperature. In most plasma-liquid studies, the focus has been on how the different gas species and photons (light) produced by the plasma interact with the liquid.

“Many researchers have revealed that reactive oxygen and nitrogen species in the plasma play an important role in the plasma-liquid interaction,” Sankaran said. “But we’ve always thought that the electrons must be playing an important part. We had preliminary evidence that suggested that the plasma electrons would reduce various chemical species in the liquid but always believed that they must have been interacting with water as well. This study conclusively proves that the electrons directly interact with and electrolyze water.”

“We found that at the plasma-liquid interface, the plasma formed a virtual cathode and electrons from the plasma reduced hydrogen ions to produce hydrogen gas, while at the metal anode, oxidation formed oxygen gas. The reactions are the same as for a traditional electrochemical cell, except now the plasma jet plays the role of one of the electrodes,” Go said.

While Go and Sankaran acknowledge that the plasma-liquid interaction is an incredibly complex phenomenon, they agree that this work fills in a crucial piece of the puzzle.

“As we continue to develop plasma jets for all kinds of applications, be they medical, environmental or for synthesizing materials,” Go said, “it’s crucial that we understand the fundamental chemistry that is occurring. The role of electrons has been somewhat overlooked, but we show that they play an important role and must be considered as we continue to try to understand these new microplasma devices.”

Much of this work was conducted with support from the Air Force Office of Scientific Research. Both Go and Sankaran are recent recipients of the AFOSR’s Young Investigator Award.