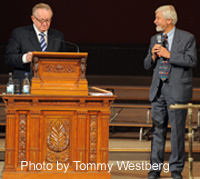 Wallensteen, a research professor at the University of Notre Dames Kroc Institute for International Peace Studies and a peace researcher from Uppsala University in Sweden, spent much of the day answering calls from European journalists asking him to comment on the Nobel Committees decision. He also addressed the issue on Swedish national television.

He has a very special, straightforward style of mediation that is rather unusual,said Wallensteen, who last month returned to Sweden to introduce Ahtisaari to nearly 800 students on the occasion of the annual Dag Hammarskjold lecture.Hes known as being very effective in moving difficult negotiations forward in conflict zones around the world.

As U.N. envoy to Namibia during its fight for liberation from South Africa, Ahtisaari played an important role in bringing independence to the country and promptingthe beginning of the end of apartheid,Wallensteen said.

In Indonesia after the 2004 tsunami, Ahtisaari negotiated an end to a 30-year-old conflict between the government and separatist guerrillas in Aceh. In the former Yugoslavia, Ahtisaari crafted a compromise regarding the settlement of Kosovo.Although Serbia rejected the proposal and Kosovo declared independence prematurely, Ahtisaairs work may have made it possible to prevent a relapse into war, Wallensteen said.

Ahtisaari also was involved in the decommissioning of weapons in Northern Ireland. This year he orchestrated secret peace talks in Helsinski, Finland, between Sunni and Shiite groups from Iraq.

The Nobel Committees choice is a return to honoring traditional peace work such as mediation, Wallensteen said. Before selecting Al Gore last year for his work on climate change, the committee had awarded the prize to master-mediators Jimmy Carter and Kofi Annan.