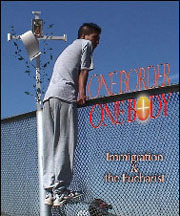 One Border, One Body:Immigration and the Eucharist,a new immigration documentary produced by University of Notre Dame theologian Rev. Daniel G. Groody, C.S.C., highlights a Mass held at the U.S.-Mexico border with half the community in the U.S., the other half in Mexico, and the altar joined at the fence.

The film, which features bishops, priests and lay people, tells the story of an annual ritual that unites people beyond political constructions which divide them and speaks of the gift and challenge of Christian faith and the call to feed the worlds hunger for peace, justice and reconciliation.The Mass was celebrated in memory of thousands of undocumented immigrants who died attempting to cross the border.

One of the ways I like to think about Christ and the migrant is in light of a passage from Matthew 25,Father Groody said.It talks about the real presence of Christ in the hungry, the thirsty, the naked, the sick, the imprisoned and the estranged.Christ says When you did something to the least of these brothers and sisters of mine, you did it to me.

So, when we look at the experience of the migrant today, we see that they are hungry in their homeland, thirsty when they cross the desert, naked after having been robbed even of their clothing, imprisoned in detention centers, sick in hospitals, and then, if they make it across, treated as strangers.I think one of the most powerful ways we can be Catholic is to be hospitable to those who are most vulnerable.

Father Groody, director of the Institute for Latino Studies(ILS) Center for Latino Spirituality and Culture and an assistant professor of theology at Notre Dame, has been studying Mexican immigration for more than 20 years and has produced two other
immigration documentaries,Dying to Live: A Migrants Journey,which aired on PBS, andStrangers No Longer,which was created for the U.S. Conference of Catholic Bishops and their Justice for Immigrants campaign.Both seek to present thehuman faceof the immigrant and Catholic social teaching on migration.

The author ofGlobalization, Spirituality and Justice: Navigating the Path to PeaceandBorder of Death, Valley of Life: An Immigrant Journey of Heart and Spirit,Father Groody also is co-editor ofA Promised Land, A Perilous Journey,and editor ofThe Option for the Poor in Christian Theology,which won the 2007 Pax Christi USA Book Award.Currently, he is conducting research on theology and immigration at the Refugee Studies Centre at Oxford University.

One Border, One Bodywas directed by award-winning filmmaker John Carlos Frey and produced with support from the ILS, Notre Dames Department of Theology, Center for Latino Spirituality and Culture and Kroc Institute for International Peace Studies, along with the Sisters of Mercy of the Americas Regional Community of St. Louis.