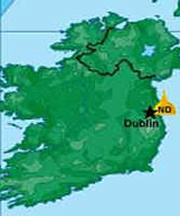 The University of Notre Dame will host a series of events Saturday (Oct 16) to celebrate the dedication of Dublins historic OConnell House as a new base for its programs in Ireland.p. The Keough-Notre Dame Centre in Dublin has been housed since its opening in 1998 in a portion of Newman House, at No. 86 St. Stephens Green. While Notre Dame continues to lease space in Newman House from University College Dublin (UCD), OConnell House is now the home for the international studies program for undergraduates and for offices for faculty and fellows in the Keough Institute for Irish Studies.p. OConnell House, located on Dublins Merrion Square, was the home of the Irish political leader Daniel OConnell from 1809 until his death in 1847. A nearly legendary Irish figure known as “The Liberator,” OConnell was a lawyer and politician who waged a successful parliamentary battle for the Catholic Emancipation Act of 1829, under which oppressed Irish Catholics increased their access to the laws and influence on the policies which governed their country. The building has been refurbished with benefactions from the families of Notre Dame Trustees Donald Keough and Martin Naughton.p. Events on Saturday will include an honorary degree ceremony, a blessing of the building by Notre Dames president, Rev. Edward A. Malloy, C.S.C., remarks from Irish President Mary McAleese, and a dedication Mass.p. Notre Dame will confer honorary degrees on Martin McAleese, a native of Belfast and the husband of President McAleese, who has been active in promoting peace and reconciliation in the north of Ireland; Carmel Naughton, chair of Co-Operation Ireland and the National Gallery of Ireland; and Peter Sutherland, chairman of BP and Goldman Sachs International. The degree conferring ceremony will take place in the Examination Hall of Trinity College. It will be followed by a blessing of the OConnell House by Father Malloy, the official opening of the house by President McAleese, and a dedication Mass at which Father Malloy will preside. Music for the Mass will be provided by the Notre Dame Folk Choir.p. More than 70 Notre Dame undergraduate students study at the Keough Centre. Faculty and staff of the centre organize lectures, seminars and conferences, independently and in association with UCD and Trinity College. Notre Dames Pastoral Initiative in Ireland, a part of the Universitys Alliance for Catholic Education, is housed within the Keough Centre.p. _Contact: Kevin Whelan, Smurfit Director of the Keough-Notre Dame Centre in Ireland, at 011-353-1-454-2854 or whelan.12@nd.edu _ p.