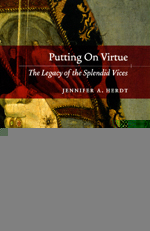 The book explores the effects of the famous Augustine claim that the virtues of pagan Rome were nothing more than splendid vices. This critique reinvented itself as a suspicion of acquired virtue as such, and thus true Christian virtue has been set against a false virtue that merely conceals pride. Ultimately,“Putting on Virtue: The Legacy of the Splendid Vices”traces a path from suspicion of virtue to its secular inversion, from confession of dependence to assertion of independence.

Herdt specializes in the history of moral thought since the 17th century, classical and contemporary virtue ethics, and contemporary Protestant social ethics and political theology. She earned her bachelor’s degree from Oberlin College and both her master’s and doctoral degrees from Princeton University. The author of"Religion and Freedom in Hume’s Moral Philosophy"and more than 20 articles and book chapters which have appeared in such publications as Journal on Religion and the American Catholic Philosophical Quarterly, Herdt serves on the editorial board of the Journal of Religious Ethics and on the board of directors of the Society of Christian Ethics.