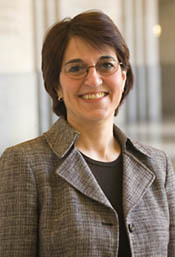 The book examines the contemporary responses of the institutional Catholic Church to pluralism, as well as how democracy has changed the Church and how religious change has impacted democratic politics in Latin America.

“Latin America has changed profoundly in the past quarter century in ways that challenge the Church; it is far more religiously plural and democratic than it has ever been,” Hagopian said. “In a time of religious and political pluralism, the Church can only be as influential as its connections to the faithful: the Church is embedded in civil society.”

Under the religious hegemony and political authoritarianism of the past, the institutional interests of the Church prevailed. With the rise of pluralism, Hagopian contends, the ideas of civil society—and the personal beliefs of the faithful—have increasing influence on the political decisions of the Church.

The culmination of an ambitious project organized by Hagopian to reinvigorate the study of the role of the Catholic Church in contemporary Latin American politics, the book originated in a series of international conferences held at Notre Dame’s Kellogg Institute for International Studies in 2003 and 2005, with funding from the U.S. Conference of Catholic Bishops and The Coca-Cola Foundation. Contributors include both U.S. and Latin American social scientists.

Hagopian, who earned her doctorate from the Massachusetts Institute of Technology, is a faculty fellow of the Kellogg Institute, where she previously served as director. She was a fellow in 2007-08 at the Woodrow Wilson International Center for Scholars. She is the author and co-editor of numerous articles and books, including “The Third Wave of Democratization in Latin America: Advances and Setbacks.”