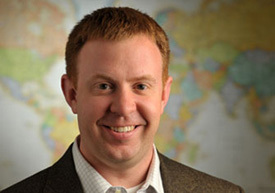 It’s an unsettling truth, but sometimes it takes a common enemy to reconcile two warring parties. This was the case after the U.S. Civil War, when virulent anti-Mormonism helped unify a divided nation, says Patrick Mason, a research associate professor at Notre Dame’s Kroc Institute for International Peace Studies.

His new book, “The Mormon Menace: Violence and Anti-Mormonism in the Postbellum South” (Oxford University Press), shows how anti-Mormonism was an important vehicle for reconciliation between North and South.

“Mormons were violently persecuted — but not because they held different beliefs and read the Book of Mormon,” says Mason.“They were persecuted because their polygamous practices challenged cultural and political orthodoxies and were seen as a threat to Christian civilization.”

In 1887, at the behest of religious reformers and the Republican Party, the U.S. Congress disincorporated the Mormon Church, seizing its assets, while southerners attacked Mormons by way of vigilante violence. Catholics, Jews and other religious minorities also were victims of violent attacks during this time, Mason says, but significantly more violent attacks were leveled against Mormons in the South.

The violence against Mormons during this time raises important questions about the limits of religious tolerance and pluralism in a democracy, Mason says.

“The United States has been remarkable in the way it has absorbed different religious minority groups with competing ideologies,” he says, “but the cost of pluralism has been accommodation and assimilation on behalf of those minority groups.”

Mormons gave up what was then a central part of their theology, Mason says. (The Mormon Church officially abandoned polygamy in 1890.) Catholics, Jews and other religious minorities also made theological accommodations as they sought to join the mainstream in the United States.

Mason’s book is “a deeply researched, clearly written analysis of an almost unknown aspect of southern and religious history,” writes John Boles, William P. Hobby Professor of History at Rice University.“It fills an important gap in scholarship and by so doing illuminates a wide variety of interpretative issues in both fields.”

“Patrick Mason tells an adventurous and violent story in this account of Mormon lynchings in the nineteenth-century South,” writes Richard Bushman, Gouverneur Morris Professor Emeritus of History at Columbia University. “His careful dissection of these bloody events leads us deep into the southern mentality and the contentious images of Mormonism in America.”

Patrick Mason earned his Ph.D. in history from Notre Dame in 2005. From 2007 to 2009, he was assistant professor of history and associate director of the Center for American Studies at the American University in Cairo. At the Kroc Institute, he is associate director for research of Contending Modernities, a global research initiative focused on the interaction among Catholic, Muslim and secular people in the modern world.