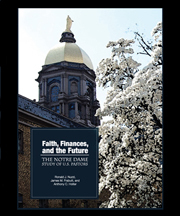 Three members of the University of Notre Dame faculty have completed a national research study titled"Faith, Finances and the Future: The Notre Dame Study of U.S. Pastors,"to be published by Notre Dame’s Alliance for Catholic Education (ACE) Press.

Authored by Rev. Ronald Nuzzi, director of the ACE Leadership Program, and ACE faculty members James Frabutt and Anthony Holter, the report presents findings from a 2008 nationwide study of pastors with responsibility for Catholic schools, as well as recommendations for addressing the most pressing issues those pastors identified. Only the third such study in the history of American Catholic education, and the first in nearly 10 years, the Notre Dame Study of U.S. Pastors is a systematic analysis of pastors’ needs and perceptions regarding Catholic schools and Catholic education.

More than 2,000 pastors from nearly every diocese in the country were contacted to participate in the study, the findings of which indicate that"regardless of location of the parish school, pastors consistently identify Catholic identity and finances as the two most important needs facing their schools."

Findings also show that pastors who believe the mission of their parish school is valued and supported by Catholic institutions of higher education tend to value the school more significantly than those pastors who do not perceive such external support for their schools.

The authors of the study offer several recommendations to address the needs illuminated by their findings. In the area of finances, they propose that Catholic school systems decrease expenses by establishing regional or national cooperatives to cut health care and energy costs, as a few dioceses have already successfully accomplished. At the same time, the authors suggest, Catholic schools can increase revenues by better accessing federal and state funds available to them, becoming more active in the school choice arena, and taking a more sophisticated approach to pooled investments.

In regard to the Catholic identity needs the pastors expressed, the research team recommends that the school community be more consciously integrated into the overall life of the parish, so that schools might be seen"as an integral part of the parish’s larger pastoral services framework."Increasing efforts to sustain and strengthen the spiritual growth of faculty and staff also is proposed as a means of enhancing the Catholicity of schools.

Workshops about the study, its findings, and subsequent recommendations are available to diocesan leaders and Catholic school system administrators upon request.

The Notre Dame Study of U.S. Pastors is just one of many recent undertakings of the ACE program in response to the final report of the 2005-06 Notre Dame Task Force on Catholic Education, titled"Making God Known, Loved, and Served."The task force, convened by Notre Dame’s president, Rev. John I. Jenkins, C.S.C., was composed of 50 leaders from throughout the country, including Catholic educators, diocesan representatives, philanthropists, investment specialists and Notre Dame faculty and staff, and was chaired by Rev. Timothy R. Scully, C.S.C., co-founder of the ACE program.

The task force’s report outlined 12 strategic objectives for Notre Dame to address the most pressing needs of U.S. elementary and secondary Catholic schools; to date more than 10,000 copies have been distributed to dioceses and Catholic school systems across the nation. Among many recommendations and action steps for the renewal of Catholic education, the report recognized the uniquely important role of pastors and that no effort to serve Catholic schools can succeed without them.

“Identifying and then responding to the needs of pastors with schools is an important step in the ongoing revitalization of Catholic education and continues the ACE mission to sustain, strengthen, and transform our Catholic schools,”Father Nuzzi said.