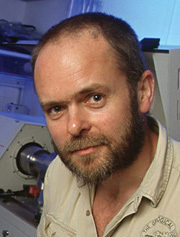 Clive R. Neal, professor of civil engineering and geological sciences at the University of Notre Dame, is one of six U.S. planetary scientists invited to participate in a lunar science workshop scheduled for June 15 to 17 in Beijing.

The workshop is open to all Chinese scientists who are interested in planetary sciences and planetary exploration missions. It is cosponsored by the China Geological Survey, under the Ministry of Land and Resources of China, and the Lunar Exploration Program Center, under the China National Space Agency.

The workshop is designed to stimulate discussion among Chinese geologists and planetary scientists about the science objectives of China’s lunar exploration for the next decade and to unify and strengthen the voice of China’s future planetary missions. It also seeks to initiate multilateral conversations with international lunar scientists on the subjects from which international collaborations can be developed.

Neal is chair of NASA’s Lunar Exploration Analysis Group (LEAG), which is responsible for analyzing scientific, technical, commercial and operational issues associated with lunar exploration. The group provides findings from these analyses to NASA through the NASA Advisory Council. As LEAG chair, Neal also serves on the Planetary Science Subcommittee of the NASA Advisory Council.

The LSI team will investigate if the Earth and moon were resurfaced by asteroids and comets billions of years ago and how such heavy bombardment influenced the evolution of life on Earth.

A member of the Notre Dame faculty since 1990, Neal is a member of the Mineralogical Society of America, the Geological Society of America, American Geophysical Union, American Association for the Advancement of Science and National Association of Geoscience Teachers. He also is currently chair of the Science and Technology Panel of the Integrated Ocean Drilling Program.