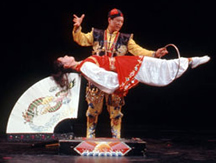 NDPresents, in its second season as an arts presenter of the University of Notre Dame, will host the National Acrobats of Taiwan, R.O.C., at8 p.m.Monday (March 14) atSouth Bend’s Morris Performing Arts Center.

The National Acrobats, a troupe of 40 contortionists, jugglers, dancers and magicians, was founded in 1980 to showcase this ancient Chinese folk art.The acrobats use ordinary objects, including chairs, tables, ladders, bowls and plates in combination with perfect movements and flexible showmanship to delight and amaze their audiences.

The troupe is under the direction of Lo Jih-Hung, a magician and Chinese television personality who was co-director of the Golden Dragon Acrobats during the 1980s and was named the director of the Fu Hsing Dramatic Arts Academy in 1991.Performers in the National Acrobats of Taiwan are graduates of the academy and average eight years of training.

The National Acrobats appears as this seasons third event of NDPresents, which will host Opera Verdi Europa on April 4.