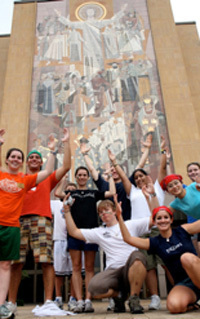 The University of Notre Dame’s campus is far from deserted during those summer months between the close of the spring and the opening of the fall semesters. In addition to the students enrolled in the seven-week summer session, the busloads of tourists, the churchgoers and pilgrims, the picnickers and lackadaisical fishermen drawn to the banks of Saint Mary’s and Saint Joseph’s lakes, legions of high school students from all over the country attend dozens of variously themed summer camps.

Of these, the most conspicuous are the athletic camps, whose football, soccer, volleyball, basketball and baseball players swarm Notre Dame’s playing fields and gymnasiums hoping to increase their strength and sharpen their prowess. But there also are other camps, devoted to other worthy adolescent ambitions.

One such is Notre Dame Vision, a program of the University’s Institute for Church Life, which this summer celebrates two milestones, its 10th anniversary and the enrollment of its 10,000th participant, Jeff Koberstein, a high school senior from Princeton, Ind.

“We use the best resources of the University to directly serve the Church,” says Notre Dame Vision director Leonard J. DeLorenzo of this unique program whose official purpose is simply “to help young people recognize God’s call in their lives and respond to that call with courage and faith.”

This year, 1,352 teenagers, enrolled in four five-day-long conferences, are gathering on Notre Dame’s campus to recognize and respond. Assisting them are 65 undergraduate students, most of them from Notre Dame along with others from Saint Mary’s and Holy Cross Colleges. To prepare for their service as mentors, musicians and small group facilitators, these undergraduates were previously enrolled in a Notre Dame theology course, “Knowing the God Who Calls,” which is taught by Jan Poorman, director of field education for Notre Dame’s master of divinity program. The Notre Dame Vision conferences include lectures, small group reflections, large and small liturgies, and much music.

The program’s theology and liturgy are Catholic, and its participants are predominantly but not exclusively so. Its tuition is kept low ($350-$450) and scholarships for the program are made possible with funds from Our Sunday Visitor, the Congregation of Holy Cross and the Knights of Columbus.

“The undergraduate mentors teach and inspire the teenagers not only to more fully engage the mysteries of the Christian faith, but also to articulate their own faith,” DeLorenzo says.

This last program aim, helping students to give a clearer voice to their faith, is crucial to its mission and deeply resonant with that of the University on whose campus its conferences are held. DeLorenzo cites recent research undertaken by Christian Smith, Notre Dame’s William R. Kenan Jr. Professor of Sociology, which found that many Catholic teens were remarkably inarticulate about their faith. DeLorenzo is confident that Notre Dame Vision is one way the University “is doing something both exciting and significant to change this situation.”

Smith’s daughter, Erin, evidently agrees. She enrolled in the program last summer and has done so again this year.

“Going to Vision was one of the best decisions I’ve ever made,” she said. “Even though I was unsure about going because I didn’t know anyone else there, I’m so glad I did! And not knowing anyone else ended up not mattering at all – I met so many new people from all over that were incredibly nice and loving people. It was such a fun experience, but even more important, it was an unbelievably powerful spiritual experience. Way more than any other faith retreat/camp I’ve been to. I learned a lot about God and other people, but I learned the most about myself and who I am in relation to those things.”

For his own part, DeLorenzo is certainly articulate enough about the summer camp he directs.

“This program is so needed for young people and the Church today because it boldly proclaims that our faith is the center of our lives, and that everything we are and everything we do is first and foremost a response to God’s love for us,” he says. “The college mentors are attracted to serving in the program because the University puts them in a position to teach, counsel, and lead teenagers through their ministry.”

Just a few weeks ago in Rome, Pope Benedict XVI, addressing members of the newly established Pontifical Council for Promoting New Evangelization, spoke of the danger an increasingly secular society poses to the growth of a sturdy Christian faith among its youngest members.

“Even in one who remains linked to his Christian roots, but lives the difficult relationship with modernity,” Pope Benedict said, “it is important to make it understood that being Christian is not a sort of uniform to wear in private or on particular occasions, but is something alive and all-encompassing, able to take up all that is good in modernity.”

This summer on the Notre Dame campus, the Vision program is helping 1,352 teenagers understand what Pope Benedict meant by that.