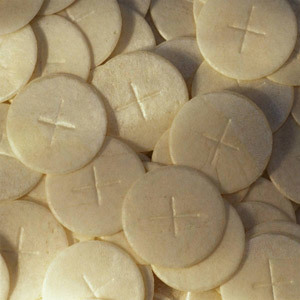 “The Eucharistic Liturgies: Their Evolution and Interpretation,” by University of Notre Dame theology professors Paul F. Bradshaw and Maxwell E. Johnson, has recently been published by Liturgical Press of Collegeville, Minn.

The book concerns the historical development of the theology and liturgy of the Church’s most important prayer, from the early Christian communal meals to the diverse Eucharistic liturgies of Eastern and Western Christians. It was conceived by its authors as a companion volume to a similar work on Baptism, “The Rites of Christian Initiation,” which Johnson wrote five years ago and which has become a standard text in graduate theology programs.

“We’ve tried to demonstrate the ongoing importance of historical-liturgical scholarship in coming to understand the centrality of the Eucharistic Liturgy in Christian life and faith,” said Johnson. “The liturgist Rev. Robert Taft, S.J., has often noted that ‘those ignorant of history are subject to the latest cliché.’ With liturgical changes taking place so rapidly in our own day, being firmly rooted in history remains of the utmost importance.”

In an early review of “The Eucharistic Liturgies,” Rev. John F. Baldovin, S.J., professor of historical and liturgical theology at Boston College, wrote that “anyone who wants a comprehensive and up-to-date history of the Eucharistic liturgy and Eucharistic theology in one volume will find it brilliantly provided in this book. An Anglican and a Lutheran teaching at a Catholic university have combined their considerable learning and skills to give us a text that will remain a standard for scholar and student alike for years to come.”

Bradshaw, professor of liturgy at Notre Dame, is an honorary canon of the Diocese of Northern Indiana, and a priest-vicar of Westminster Abbey. He has written or edited more than 20 books on Christian worship. A former president of both the North American Academy of Liturgy and the international Societas Liturgica, he also served as editor of the journal Studia Liturgica from 1987 to 2005.

Johnson, professor of liturgy at Notre Dame, is a pastor in the Evangelical Lutheran Church in America. He has written or edited 15 books and numerous essays and articles on the development of early Christian liturgy as well as on current ecumenical theological questions affecting Roman Catholics, Anglicans and Lutherans.