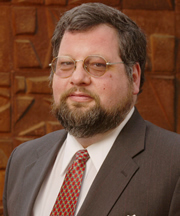 As the Senate begins a controversial debate of the biggest overhaul ofU.S.immigration law in two decades, Allert Brown-Gort, associate director of the Institute for Latino Studies at the University of Notre Dame, says its long overdue and the current law is out of touch with reality.So, too, he says, are some of the measures being considered on Capitol Hill.

Enforcement-only laws may make good politics, but they make bad economics and even worse policy,Brown-Gort said.

President Bush wants a guest worker program that encourages the undocumented to register. The House supports building a fence along the border and increased policing, what Brown-Gort callsa draconian bill that concentrates exclusively on punitive enforcement measures.And Senate measures range from addressing only border security and enforcement to variations of a temporary worker program.

We should not try to ignore the facts of our need for immigrants by restricting the number of appropriate visas and by making life miserable for those who are already here without documents,Brown-Gort said.After all, that approach is what got us in this mess in the first place.We need to find a mechanism that allows immigrants to earn legalization while recognizing the contribution they make to this country and the fact that the great majority of their children are Americans.

A fellow of the Kellogg Institute for International Studies at Notre Dame and a native ofMexico, Brown-Gort formerly served as deputy director of the North American Public Policy Studies Program at the Autonomous Technological Institute of Mexico and headed the Latin American Initiative of the Conservation Education Programs atColumbiaUniversity.