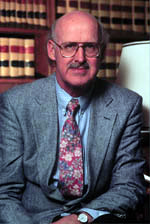 Gonzales v. Raich, this weeks Supreme Court ruling that federal authorities may prosecute even sick people from states whose laws permit the use ofmedical marijuana,came as no surprise to John Robinson, associate dean ofNotre DameLawSchool.

The case concerned a lawsuit brought by two Californian women, Diane Monson and Angel Raich, against then-U.S. Attorney General John Ashcroft, asking for a court order allowing them to smoke, grow or obtain marijuana without fear of arrest, home raids or other intrusion by federal authorities.Raich, who suffers from scoliosis, a brain tumor, chronic nausea, fatigue and pain, smokes marijuana every few hours. Monson, who has degenerative spine disease, grows the marijuana she smokes for pain relief in her backyard.

According to Robinson, the courts decision against the womenis not particularly surprising as a matter of constitutional law.

Recalling the courts 1942 decision that Congress could legally regulate the amount of wheat a farmer could raiseeven when some ofthe wheat in question was being raised not for any commercial purpose but for consumption by the farmer and his family,Robinson observed that in Gonzales v. Raich,where both sides agreed that Congress has the power, under the same clauses that were at issue in the 1942 case, to try to wipe out the interstate market in marijuana, it was permissible, the Supreme Court said, for Congress to prohibit even really sick people from growing marijuana at home so that they can use the resulting product to alleviate some of the worst symptoms of their disease.

Robinson said that while Raich and Monsons case was lostthey are still free to press other legal theories in defense of their claim to freedom from the federal law in question here when the case is sent back to the Ninth Circuit for further consideration, but their chances of success on those theories aren’ttoo good.