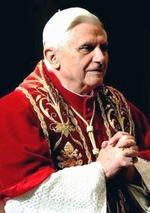 Pope Benedict XVIs first encyclical,Deus Caritas Est(God Is Love) was issued yesterday in seven languages.A 16,000 word teaching letter addressed to all Catholics, the encyclical has been widely anticipated as an indication of the new popes concerns, understandings and inclinations, and of how he hopes to exercise his ministry.

In an interview in todays Newsday, Scott Appleby, a religious historian and director of the Kroc Institute for International Peace Studies, described it asa return to a theology of church in which the church is primarily given the responsibility to form consciences and to provide charity – something no Catholic would disagree with – but which is not further responsible for prophecy or for actual social reform towards justice.That’s not how my generation of Catholics understood Vatican II.

To Lawrence S. Cunningham, John A. OBrien Professor of Theology, the encyclical seemeda very sophisticated statement of what the church stands for in terms of love of God and love of neighbor.I take that as a very hopeful thing.Speaking to a writer for theBaltimoreSun, Cunningham also remarked on what Pope Benedict left out.Now this would have been a perfect time for him to launch into a huge diatribe against the moral relativism and pornography and so on,he said. "He doesn’t do that. He sticks pretty much to what he wants to say.