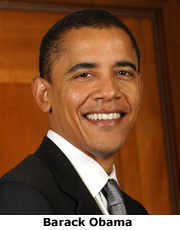 U.S. Sen. Barack Obama, D-Ill., announced Tuesday that he has filed to form a presidential exploratory committee, a step that allows him to begin raising money to mount what may well be the most expensive campaign in history. A formal announcement of his candidacy is expected next month.

Robert Schmuhl, a professor of American studies at the University of Notre Dame, has examined Obamas rapid rise in political popularity and finds – surprisingly – that the young candidate has much in common with another, very different, politician – former President Ronald Reagan.

In terms of political philosophy, professional background and racial heritage, Obama and Reagan are distinctly different, one a figure of the new century and the other a representative of the previous one,Schmuhl wrote in an essay published Jan. 14 in the Chicago Tribune.Look more closely, however, and you see a number of striking parallels between the young senator contemplating a White House campaign and the late, Illinois-born two-term president.

Among the similarities is the dominance of their mothers in their formative years, early careers outside of politics, humbling election losses, and, perhaps most notably,the mysterious yet magical quality of charisma that attracts and inspires others.

Schmuhl adds:Their ready smiles, rhetorical eloquence and rock-star magnetism transcend day-to-day politics, and citizens respond emotionally as well as intellectually. At a time when so much political oratory sounds processed by an anonymous speech writer, Reagan and Obamas words have the ring of authenticity.

To be sure, Schmuhl emphasizes, there are plenty of differences between Reagan andObama, including the formers far greater governmental experience.

But the intriguing similarities reveal two political figures possessing common traits, including vivid personalities with rare skill in connecting with the public,he says.Both, in their ways, speak American, the distinctive dialect of the nations ideals and yearnings. Reassuring smiles and welcome wit or self-deprecating humor notwithstanding, electoral ambition is an animating drive for each.

Schmuhl is the Walter H. Annenberg-Edmund P. Joyce Professor of American Studies and Journalism at Notre Dame and director of the Universitys John W. Gallivan Program in Journalism, Ethics and Democracy. He is the author or editor of 10 books, includingStatecraft and Stagecraft: American Political Life in the Age of PersonalityandWounded Titans: American Presidents and the Perils of Power.