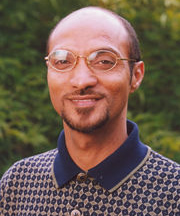 Rashied Omar is a Muslim scholar at the University of Notre Dame who makes it his mission in life to harness religion as a force for building peace. He shakes his head in deep distress that Danish cartoons have led to violent protests in the name of Islam.

This has really set us back,said Omar, who coordinates the Program in Religion, Conflict and Peacebuilding at Notre Dames Joan B. Kroc Institute for International Peace Studies.

Omar is a former imam of a South African mosque, and he teaches a course in Islamic ethics. He understands why most Muslims view a cartoon depicting the Prophet Muhammad with a bomb coming out of his headgear as offensive and reprehensible.

It is yet another illustration of Islamophobia and hate speech against Muslims that in their view appears to be pervasive in western media depictions of Islam," he said.

But those who vent their dismay with destruction are wrong, Omar believes. He has joined Islamic scholars and institutions all over the world- including the Grand Muftis of Syria,Egyptand the Turkish Ministry of Religious Affairs- who have unequivocally condemned the violence that has accompanied some of the Muslim protests over the cartoons.

The death of four Afghan protestors, the killing of a Catholic priest inTurkey, the torching of Danish embassies inSyriaandLebanon, the issuing of death threats against journalists should be condemned as abomination and contrary to the letter and spirit of Islam,he said.

He called upon the world community to use the tragic sequence of events as an impetus for candid dialogue about freedom of speech, cultural xenophobia, and the root causes of violence and terror.

There is a dire need for the followers of Judaism, Christianity and Islam, as well as all other traditions, to retrieve our common humanity and to end the horrific dehumanization that is taking place on global scale,he said.

Omar holds a doctorate from theUniversityofCape Town, and a masters degree in peace studies from Notre Dame.