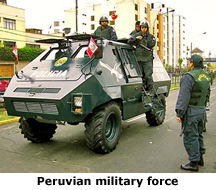 We are gratified that theInter-American Courthas seen through the smokescreen concocted by the Fujimori regime to conceal its crimes,Casselsaid.At long last, 15 years after this premeditated mass murder, hundreds of victims will receive a measure of justice, including financial reparation and moral satisfaction.

Prisoners who attempted to surrender during the attack were shot dead by sharpshooters.Some survivors were tortured, raped and executed.Many of the 600 men,women and children held in the prison at the time of the raid were being held without any charges; some had been sentenced byfacelesscourts without access to legal counsel after trials that lasted a matter of minutes.Many were being held simply because their affiliations, such as being university students, were thought to imply opposition to the Fujimori regime.

In a 156-page judgment issued last month, theInter-American CourtfoundPeruresponsible for multiple violations of the right to life, physical integrity, due process and judicial protection of the victims and their family members.The legally binding judgment orders Peru to pay substantial damages to victims and family members; to provide free physical and mental health care for those who still suffer from their injuries; to train police and military forces in international human rights standards; and publicly to accept responsibility for the attack and apologize to the victims, among other symbolic acts of reparation.It also ordersPeruto investigate, prosecute and punish those individuals found to be criminally responsible for thecrimes against humanitycommitted during the attack.

The Notre Dame team continues to press for Fujimoris extradition fromChileto face criminal prosecution for planning and directing the raid.

Established in 1979, the Inter-American Court of Human Rights is an organ of the Organization of American States.