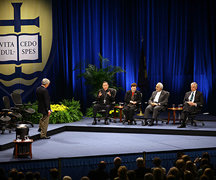 A panel of diverse religious leaders participating Thursday (Sept. 22) in the first Notre Dame Forum agreed that more communication and perhaps a bit less certainty among people of different faiths can result in religions that bind rather than divide the world community.

The two-hour forum, titledWhy God? Understanding Religion and Enacting Faith in a Plural World,drew about 3,000 students, faculty, staff and others to theJoyceCenterand was moderated by former NBC Nightly News anchor Tom Brokaw. It was the academic cornerstone of the inauguration of Rev. John I. Jenkins, C.S.C., as the Universitys president.

I believe these issues before us,Brokaw said in his introductory remarks,are the most critical issues facing our country and our world.

In response to a question by Brokaw concerning the violence in the name of Islam, the panel was unified in rejecting fundamentalists of all religious faiths.

The loudest religious voices today are the people who advocate divisiveness and conflict,said John C. Danforth, formerU.S.senator fromMissouri, a formerU.S.ambassador to the United Nations, and an ordained Episcopal minister.Those who advocate otherwise have been strangely quiet, and its time for them to speak out.

Is religion going to pull people together or drive them apart? In my view, we need a major discussion on the purpose of religion, and if we decide it is to pull us together, then we need a major conversation in that regard.

Building on Danforths comments, Naomi Chazan, a professor of political science and African studies at Hebrew University of Jerusalem and a former member of the Israeli Knesset, added:It is not religion of any sort that is the problem. The problem is fundamentalism, and that comes in all forms – Jewish, Muslim, Christian. Fundamentalists think they have all the answers to all the questions, and that terrifies me, and it should terrify all of us.

Fundamentalism is one of the biggest problems in the world today,agreed Cardinal Oscar Andrés Rodríguez Maradiaga, S.D.B., archbishop ofTegucigalpa,Honduras.

Danforth clarified his position by saying that rather than fundamentalism, he believescertainty is the problem – people who believe that they are on Gods side, or they know Gods will.

The fourth panelist, Imam Feisal Abdul Rauf, who is the founder and chief executive officer of the American Society for Muslim Advancement (ASMA) and imam of New York Citys largest mosque, observed that the issues thatseparate the West and Islam are only partially theological. They also involve economics and power. It is my hope that the American Muslim community will be an important interlocutor between the West and Islam.

The second half of the forum featured four additional panelists – Notre Dame faculty members Asma Afsaruddin, associate professor of Arabic and Islamic studies in the classics department, and Lawrence E. Sullivan, professor of world religions in the theology and anthropology departments, and students Kathleen Fox, a junior theology and philosophy major from Kansas City, and Kroc Institute graduate student Denis Okello of Uganda.

Many students and faculty who attended the forum prepared for it by exploring the themes of religious diversity and tolerance in a set of readings, chief among them the bookWhen Faiths CollidebyUniversityofChicagohistorian Martin E. Marty.

In addition to issues related to religious conflict, the forums panelists also discussed the role of women in religion and society, human rights and economic development.

Established by Father Jenkins, the Notre Dame Forum in future years will continue to bring world leaders to campus to discuss their experiences and offer advice to students preparing to enter the public debate and shape the professional world.

The forum was taped by C-SPAN for broadcast at a time to be announced.