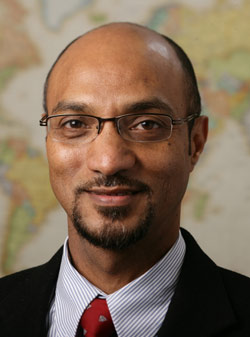 “One Sunday in Cairo’s Tahrir Square, a remarkable scene occurred during the 18-days of protest that ended the despotic rule of Hosni Mubarak,” said Rashied Omar, Research Scholar of Islamic Studies and Peacebuilding at the University of Notre Dame’s Kroc Institute for International Peace Studies. “Thousands of Muslims protectively encircled the square while Coptic Christians conducted a prayer service to honor the victims of the brutal security crackdowns.”

Omar says religion can play a key role in rebuilding societies after despots fall and violent, oppressive governments are toppled, as happened in Egypt and Tunisia.

“In the midst of the worst kind of barbarism, people of different faith traditions found solace and healing in their own faiths and in interreligious solidarity,” Omar says. “Now the scene in Tahrir Square is being duplicated all across North Africa and the Middle East.

“Recently in the Libyan capital of Tripoli, Rev. Daniel Farrugia, a senior Roman Catholic priest at St. Francis Catholic Church, refused to be evacuated, choosing instead to stay and serve with ‘our sisters,’ nearly 100 nuns working in hospitals and health centers treating the sick and injured,” he says.
Religion and religious people, so often considered part of the problem, according to Omar, can instead play key roles in rebuilding society.

“In my own country of South Africa, black Christians, Muslims and many people of faith struggling against apartheid played a central role in transforming their society from racial oppression and dehumanization towards hope and justice,” Omar says. “In the midst of the ‘Tunisami’ now sweeping away despotic rulers across North Africa and the Middle East, ordinary people can collect the threads of peace and justice that are at the heart of both Islam and Christianity to transform their bleak worlds of indignity and dehumanization into freedom, democracy and justice.”

Omar’s research and teaching focus on religion, violence and peacebuilding, especially the Islamic ethics of war and peace and interreligious dialogue. He spends half of each year at Notre Dame and the other half serving as the coordinating Imam at the Claremont Main Road Mosque in Cape Town, South Africa. He also is an international trustee emeritus of the Council for a Parliament of the World’s Religions.

As a young man, Omar was jailed as a student activist against apartheid. Since then, he says, “My struggle has been how to build a bridge between my faith commitment and my participation in protest against racism and apartheid.” As an imam in Cape Town, before and after the transition to democracy, he has insisted on being part of civil society, separate from the state, and on speaking truth to power and not being part of any political party.

Media Advisory: Omar’s comments may be used in whole or in part. He is available for interviews and can be reached at 574-631-7740 or Omar.1@nd.edu