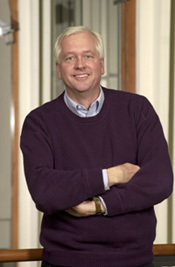 The economy is recovering, although it is still in a recession, according to Jeffrey Bergstrand, professor of finance at the University of Notre Dame and expert in the area of the U.S. economy.

“The reason that these two conclusions can co-exist is that the latter is consistent with the technical definition of a recession, which is two or more consecutive quarters of a decline in real GDP,” Bergstrand explains. “While we have experienced that decline since June 2008, the recession started officially in December 2007. That is when labor economic activity peaked, with declining activity since then.

“However, the economy is recovering, because the trend of the economy is for the level of decline to abate. By the second half of 2009 and into 2010, it is likely that real GDP growth will be positive, although the growth rate will not be strong enough to avoid economic pain. The unemployment rate will probably peak at the end of 2009, but it’s likely that rate of decline of unemployment will be very slow through 2010. Altogether, this modest pace of recovery will mean economic hardship through most of next year.”

There are several key indicators supporting the conclusion that the economy is slowly recovering, according to Bergstrand. First, the decline in overall economic activity (real Gross Domestic Product) was at a much smaller rate in the second quarter of 2009 than in the previous two quarters.

“There are two reasons behind this,” he said. “First, the sharp and large monetary policy expansion through various mechanisms used by the Federal Reserve helped to prevent a financial market meltdown. There has been a fairly systematic reduction in LIBOR rates (which indicate risk in lending) since the crisis of September and October. This crisis had a large impact on shutting down economic activity because of a lack of necessary credit lines in the fourth quarter of 2008 and first quarter of 2009.”

Second, both the plan for fiscal stimulus in the fourth quarter and then the actual passing and implementation of the fiscal stimulus package in the first quarter were key for creating positive demand for goods and services in the economy, Bergstrand says.

“This stimulus is essential for this year and next to support aggregate demand,” he said. “Inventories are being worked off, which should be finished later this year, allowing more production and more consumption in 2010. However, investment in new equipment and structures will be stagnant in both 2009 and 2010, creating much slack in the economy. Barring any other unforeseeable shocks, though, the economy is poised to grow next year, and at an even faster rate of 3 percent to 4 percent in 2011. Full employment may be restored by the end of 2012 or the beginning of 2013.”

Bergstrand has been a finance professor in Notre Dame’s Mendoza College of Business for more than 20 years, as well as a fellow of the University’s Kellogg Institute for International Studies, and a research associate of CESifo, an international network of researchers based in Europe. His research on international trade flows, free trade agreements, foreign direct investment, multinational firms and exchange rates has been published in more than 30 articles in such journals as the American Economic Review and as chapters in books.
Bergstrand won the 2003 Jagdish Bhagwati Award for Best Paper for co-authoring “The Growth of World Trade: Tariffs, Transport Costs and Income Similarity,” published in the Journal of International Economics.

Bergstrand also served as co-editor of the Review of International Economics from 1996 to 2003 and remains on its editorial board. He has been a visiting scholar at the European Commission in Brussels, the IFO Institute/University of Munich and other institutions. Bergstrand’s current research focuses on economic determinants of multinational firm behavior and foreign direct investment, and the growth of regionalism. He also is advising the European Commission on the effects of EU-U.S. nontariff barriers on trade.