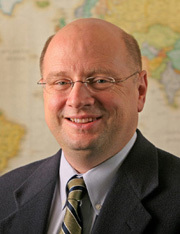 Though his speech to the Arab world on Thursday did mention past American failings – particularly the coup in Iran – President Obama stopped short of apologizing for those missteps.

“He didn’t hold out hope for reconciliation for past matters,” according to R. Scott Appleby, University of Notre Dame professor of history and director of the Kroc Institute for International Peace Studies.

“He offered a tough-minded analysis of what the situation is right now, today.”

It was “a straight-forward approach, what we might call a mainstream American position – the unvarnished truth as he saw it. He went as far as one can go in one speech with reframing relations between the West and Islam,” Appleby says, “and tackled head-on the issues that divide those two worlds.”

Though Obama’s call for Israel to accept some of the burden for solving the conflict with Palestinians was met with resistance from Israel, the speech still “signals a shift” that in no way diminishes support for Israel, “but suggests that the U.S. wants to be an equal partner with Israel in determining how that support should be understood and how Israelis themselves must act within the context of a three-way partnership that has really not been so strongly pronounced in the past,” Appleby says.

“The U.S., Israel and the Arab-Muslim world are all partners in this and that came across very clearly in a way that really has not come across in previous presidential pronouncements from earlier administrations.”

Appleby’s areas of research include the roots of religious violence and the potential for religious peacebuilding. His books include “The Ambivalence of the Sacred: Religion, Violence and Reconciliation” and “Spokesmen for the Despised: Fundamentalist Leaders of the Middle East.”

Video featuring Prof. Appleby discussing the speech can be viewed at: http://www.youtube.com/watch?v=P-ekiTFTwH0&feature=channel_page

Media Advisory: Prof. Appleby’s comments or video may be used in whole or in part. He is available for interviews and can be reached at 574-631-5665 or Appleby.3@nd.edu