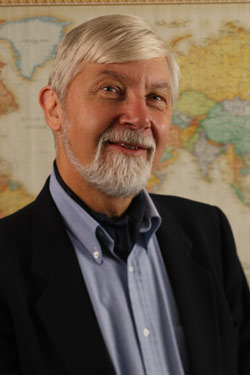 The awarding of the Nobel Peace Prize to Chinese dissident Liu Xiaobao was expected, according to Peter Wallensteen, the University of Notre Dame’s Richard G. Starmann Sr. Research Professor of Peace Studies. Liu, a professor of literature, is one of China’s most prominent human rights activists. He has been in prison since 2008 for publishing a political reform petition.

According to the Norwegian Nobel Committee, Liu is the first person in China to receive the Nobel Peace Prize, and he is recognized for his sustained and nonviolent struggle for human rights in China. The Dalai Lama also received it, but for his peaceful struggle for Tibet, while outside the country.

“This continues a tradition where the prize has been used to highlight peaceful struggles for human rights in authoritarian societies,” Wallensteen says. “For example, it went to Shirin Ebadi from Iran in 2003, Aung San Suu Kyi from Burma in 1991, Andrei Sakharov from the Soviet Union in 1975, Albert Lutuli from South Africa in 1960, and Carl von Ossietzky in Nazi-Germany in 1935.

“Several times, this use of the award resulted in crises between the Nobel committee and the regimes, most seriously perhaps with Nazi Germany,” Wallensteen says. The Chinese government reportedly is outraged over the award to Liu and has issued a statement saying that the award will damage Chinese relations with Norway.

Wallensten points out that, historically, a number of the peace prize laureates have not been able to go to Oslo for the ceremony. Andrei Sakharov’s prize was received by his wife, Yelena Bonner, and Aung San Suu Kyi was prevented from going by the Burmese military regime. Instead, the award was received by her husband and two sons.

“The Prize for Liu Xiaobao is most similar to the one for Andre Sakharov,” Wallensteen says, “in that it goes to an academic who produced a manifesto for human rights based on international principles, not a leader of a party or a movement. In such situations, the prize helps illuminate human rights activities and gives the laureate a voice internationally as well as nationally.”

A leading international peace researcher who works on both sides of the Atlantic, Wallensteen is a professor at Notre Dame’s Kroc Institute for International Peace Studies and at Uppsala University in Sweden. Among his publications are the influential “Understanding Conflict Resolution: Peace, War, and the Global System,” published in English and Arabic, “International Sanctions: Between Wars and Words” and “Making Targeted Sanctions Effective.”

Media advisory: Wallensteen’s comments may be used in whole or in part. He is available for interviews and can be reached at 574-631-0935, Pwallen1@nd.edu