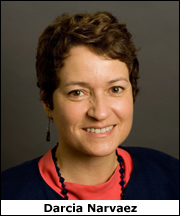 Language, social skills and physical dexterity are familiar developmental milestones that parents of young children can influence and track with relative ease.

But what about the development of compassion and empathy?Are some children just born with the innate ability to feel for others while other children are not?

Our ethical behavior is greatly affected by the care giving we receive in the first few years of life,says University of Notre Dame psychologist Darcia Narvaez, who researches character education and moral psychology.Warm, responsive parenting is linked to greater conscience development.

According to Narvaez, ethical behavior falls into three ethics expressed indifferent parts of the brain – thetriune ethicstheory: security ethic, which focuses on the survival and enhancement of ourselves, an orientation often expressed in a desire for things over a desire for relationships; engagement ethic, which allows us to empathically relate to others and act from compassionate love, and which forms the basis for acts of moral courage; and imagination ethic, which allows us to imagine the needs of others with whom we are not face-to-face.

Parenting influences the formation of the engagement and imagination ethics and whether or not the security ethic predominates in a persons life. Early experience with caregivers has a great deal of influence on the wiring and formation of the individuals brain and personality.Narvaez says.

In order for parents to help their children develop their fullest potential for anethical brain,Narvaez recommends several practices:

Hold your child.Studies of other mammals show that physical separation from a caregiver causes physiological systems to become disorganized.

Promote eye gaze. Extended and pleasurable eye gaze with an infant helps the brain wire itself for positive social interaction.

Breastfeed.Breast milk has the right balance of hormones for brain development (intelligence and sociality) and also affects immunity throughout life.

Avoid letting an infantcry it out.The brain of a crying infant is flooded with stress hormones and creates a more anxious personality, which in turn is more likely to develop a self-focused person.

Limit electronic games and audio-visual media since it interferes with brain wiring.Children under two should never watch television or videos, which have been linked to ADHD later in life. Throughout early childhood and even into the college years, the brain is influenced by experience.What it spends time focusing on becomes automatic responses in the future.

Children in the United States are often discouraged from deriving pleasure from relationships – we make them do things alone, including sleeping – so their brains look for pleasure elsewhere, typically in things.

They develop this security blanketin things because they learn that they cant rely on people.

Details of Narvaezs research on ethical and moral brain development were published in a recent article inNew Ideas in Psychology.

A member of the Notre Dame faculty since 2000, Narvaez also directs the Center for Ethical Education ( http://cee.nd.edu ) which hosts the Good Media, Good Kids project that uses the Rating Ethical Content System to rate the ethical content in childrens media.She has co-authored several books, includingMoral Development, Self and Identity.Narvaez also is co-author of a chapter on character education in the 2006 edition of the “Handbook of Child Psychology,” and has published articles in the Journal of Educational Psychology and Developmental Psychology.

_ Media advisory: Narvaezs comments may be used in whole or in part.She can be reached for further comment at 574-631-7835 or_ " dnarvaez@nd.edu ":mailto:dnarvaez@nd.edu