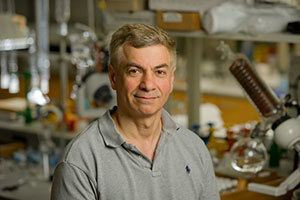 Mobashery indicated that the general public is gradually beginning to appreciate the gravity of the clinical situation with the problem of antibiotic resistance.

“Often, the public appreciates that antibiotic resistance means that drugs no longer work in treatment of infections,” he said. “But the public is less aware, for example, that certain infections could be fatal at 50 percent of the time. Furthermore, availability of antibiotics enables other invasive medical treatments that we often take for granted presently.

“For example, if a member of a family plans for hip replacement surgery, without antibiotics, the operation will not be attempted. An athlete who would have knee-repair surgery to get back to the field in six weeks, might not be able to do so. The lack of antibiotics will eliminate the possibility of certain cancer chemotherapies, organ transplants and many elective surgeries, to name a few.”

For the past 50 or 60 years, researchers have been able to stay one step ahead of traditional infections, Mobashery said. Whether this trend can continue is an important societal question on both delivery of medical care as well as expectations on quality of life for the years to come.

The economics of the pharmaceutical industry have allowed big pharmaceutical companies to abandon development of antibiotics. It is much more profitable for them to develop drugs for chronic ailments such as blood pressure, reduction of cholesterol and the like, which manage the disease, Mobashery said. Antibiotics, which are used for short courses and then cure the patient, are less attractive.

“As the pharmaceutical exodus from the field is unabated, the burden for discovery, development and delivery of antibiotics for treatment for future infections falls on the shoulders of academic researchers and governmental agencies,” Mobashery said. “It is in this vein that the proposal by the Obama administration for additional funding is significant.”

The Obama administration’s proposal calls for spreading roughly $1.2 billion across several federal agencies to combat the mounting public health crisis of drug-resistant infections, a health issue that causes approximately 2 million illnesses and 23,000 deaths each year in the United States alone.

Mobashery, who has been a member of the Notre Dame faculty since 2003, is a world-renowned expert in antibiotic discovery and in antibiotic resistance. His research interests encompass studies of mechanisms of resistance to antibiotics and the means to circumvent them, discovery of new antibiotics, studies of the mechanism of action of these antibiotics, and investigations of complex microbial systems such as the cell wall, which is a target for antibiotic action. He has long been a proponent of increased research funding to help mitigate the emergence of resistant bacteria and the means to combat it.