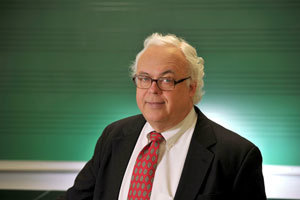 The recent discovery of a previously unknown musical manuscript by Ludwig van Beethoven provides a glimpse of the composer at work on a medieval hymn he would already have known quite well, according to Peter Jeffrey, Michael P. Grace Professor of Medieval Studies at the University of Notre Dame.

Beethoven’s manuscript was an arrangement of the Gregorian chant “Pange Lingua,” a hymn often sung in Catholic liturgies during Holy Week.

“Beethoven had a Catholic upbringing and certainly knew the liturgical music of his time,” Jeffrey said, “though as an adult he was not an active churchgoer and he composed little music for liturgical use. But as a young man he did work as a church organist in his native Bonn, before he moved to Vienna in 1792 at the age of 22.

“From that early period we have some keyboard harmonizations he wrote for the ‘Lamentations of Jeremiah,’ a Gregorian chant that was sung during Holy Week. The study of harmony and counterpoint in those days focused on how to harmonize hymn tunes and chant melodies, so any well-trained musician of that time would have been very familiar with this practice.

“Why, in 1821, would Beethoven have written out a harmonization of ‘Pange Lingua,’ a medieval hymn about the Holy Eucharist for the feast of Corpus Christi? The hymn was certainly familiar to him from his childhood, and it’s relatively well-known even today. Beethoven might have been musing about the harmonic potential of the melody, in which case it is basically a counterpoint exercise. Or someone might have asked Beethoven to supply a harmonized version for liturgical use, as Professor Barry Cooper has suggested. In that case we do not have the finished version, if there ever was one. I would not be so quick to agree with Professor Cooper that Beethoven ‘made slight changes to the tune.’ There were multiple versions of the tune in circulation, and to support this claim we need to compare Beethoven’s sketch with the versions of the tune published in the hymnals Beethoven is likely to have known.”

A scholar of Gregorian chant, Jeffrey earned a doctoral degree in music history from Princeton, where he studied the Beethoven sketchbooks.