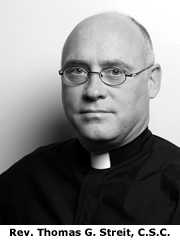 Father Streit is being honored for his efforts to eliminate lymphatic filariasis (LF), a mosquito-borne infection that affects more than 120 million people throughout the tropics, and for his passionate advocacy on behalf of its victims.

After earning his doctorate, he accepted a postdoctoral position with the Centers for Disease Control and Prevention (CDC). Posted toHaiti, he conducted research on the transmission and control of LF.He also helped establish, as the first full-time CDC staff director inHaiti, what is now an international reference center for LF at theHolyCrossHospitalin Leogane.Based on research and community trials conducted inHaiti, the World Health Assembly in 1997 called for theeliminationof LF. More commonly known as elephantiasis, the condition joined four other global health problems now slated for eradication.

Father Streit joined the Notre Dame faculty in 1997 as an assistant research professor of biological sciences and established the Universitys Haiti Program, aninitiative at the forefront of a global alliance of partners collaborating to reach the goal of eliminating LF.Due in large part to the success of the Haiti Program, the Gates Foundation awarded Notre Dame a $5.2 million grant in 1999 to develop a model program for the global elimination of filariasis. More than 2.5 million treatments for filariasis and associated conditions have been delivered by the Haiti Program thus far, and the country is on track toward the historic goal of eliminating LF by 2013.