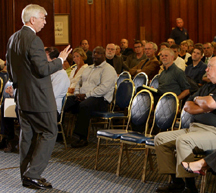 NCAA President Myles Brand acknowledged that he waspreaching to the choirwhen he discussed academic and fiscal reform in intercollegiate athletics Monday (Aug. 20) at the University of Notre Dame.

Youre doing very well here,Brand told an invited assembly of Notre Dame faculty, staff, athletic department officials and coaches.Athletics is about winning, but its also about graduating student-athletes. You can do both, just look at Notre Dame.
Now in his fifth year as NCAA president, Brand said modern reform in college sports dates to a 1991 report by the Knight Commission on Intercollegiate Athletics, which was co-chaired by Notre Dames president emeritus, Rev. Theodore M. Hesburgh, C.S.C.

Brand, formerly president at Indiana University and the University of Oregon, believes his appointment was a clear signal by his peers that they want athletics programs to show more responsibility in regard to academics and financial affairs.

Under Brands leadership, the NCAA has instituted two new academic standards by which student-athletes and teams are measured: the Graduation Success Rate (GSR) and the Academic Progress Rate (APR).

The GSR provides amore accurate measureof the graduation rate of student-athletes than does a similar measure administered by the Department of Education, according to Brand.

The APR surveys the performance of every team at every NCAA institution. Teams that fail to maintain a minimum standard will face a loss of scholarships and potential decertification.

Well be most successful if we dont issue any of the sanctions,Brand said.The goal is to change behavior.

Someones not listening out there,he said.

That isnt the case at Notre Dame, he emphasized.

You dont have any teams even close to being at risk of losing scholarships,he said.That is very unusual. Even the very finest schools have one or two teams at risk.

Brand added that academic reform movements in higher education have failed in the past, and that he anticipates resistance if or when sanctions are applied to programs that fail to meet APR standards.

Can the presidents, athletic directors and NCAA hold the fort?he wondered.It will be very interesting.

Brand admitted that fiscal reformation in college sports is a more difficult issue.

Brand said that athletic department budgets are a relatively small percentage of any universitys overall budget, but that the rate by which they are increasing is a concern.

Over the past decade, the athletics programs of only six institutions – including Notre Dame – have been in the black, while the rest are subsidized to greater or lesser extents by their universities.

Now, there is nothing wrong with subsidizing a department. After all, philosophy departments, for example, dont bring in more money than they spend,said Brand, who is himself a philosopher.So, subsidizing athletics is OK. The question is by how much?

The athletics experience on a college campus is valuable, he said, and certainly has a place in higher education.

College is more than just classroom instruction,he said.We take teen-agers and teach them life skills, goal setting, values and attitudes that are productive.

Thats where athletic participation comes in. Learning to persist and work hard – athletes learn that every day on the field. Not all of our students learn these lessons as tangibly. There are other ways – in student journalism, band or other extracurricular activities – but athletics is the best. Thats why we want broad-based athletics programs.

That said, he added:So, how much should we subsidize athletics? We are not acting fiscally responsibly when funds are being taken from academics to support athletics. Thats when there is a problem.

While the NCAA is unable to dictate how universities chose to spend on athletics, the association sponsored a study that was issued last year that provides all institutions with comparative data on athletics spending.

Brands talk was titledThe State of Collegiate Athletics in the 21st Century: Issues, Challenges and Expectationsand was sponsored by Notre Dames Office of the President, Faculty Board on Athletics and Department of Athletics.