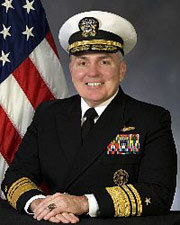 Vice Adm. Robert T. Conway Jr., commander of Navy Installations Command in Washington, D.C., will deliver the Commissioning Ceremony address to University of Notre Dame ROTC students at 9 a.m. Saturday (May 17) in the DeBartolo Center for the Performing Arts.

Responsible for all Navy installations and activities worldwide, Conway has held joint and Navy positions overseas and in both the Pacific and Atlantic fleets and served in leadership positions aboard the USS Vesole, Towers, Bainbridge and Gridley.He commanded the USS John Young and Destroyer Squadron 7 in San Diego and the Naval Surface Group Middle Pacific in Hawaii, and he was a member of the original crew of the Navys first Expeditionary Strike GroupExpeditionary Strike Group One/Peleliu Strike Group.

A total of 53 officers from Notre Dames ROTC unitsthe Army, 9; the Air Force, 16; the Navy, 24; and the Marines, 4will be commissioned.