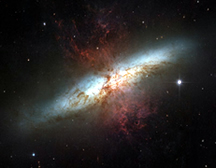 NASA has designated the University of Notre Dame as one of 50 official national sites to receive and display a photo print of the starburst galaxy Messier 82 (M82), taken by the Hubble Space Telescope and made in celebration of the 16 th anniversary of its launch.

A public unveiling of the print will be held at5 p.m.Thursday (May 4) at Notre Dames Office of Community Relations,217 S. Michigan St., SouthBend. The event, which is free and open to the public, will include brief presentations by Notre Dame astronomers Peter Garnavich, Christopher Howk and Philip Sakimoto, who will discuss the legacy of the Hubble Space Telescope and the significance of the image.

The 4-foot-by-six-foot, 100-megapixel photo print depicts the continuous cycle of star formation and supernova explosions – or starbursts – in galaxy M82.While scientists do not know if there is any life in that galaxy, it is believed that its supernova explosions aresimilar to events that took place long ago in our own Milky Way galaxy, and were responsible for creating the elements out of which the Earth and our own bodies are made.

The Hubble Space Telescope image from which the print is being made may be viewed at: http://hubblesite.org/newscenter/newsdesk/archive/releases/2006/14/ .

The print will remain on public display at Notre Dames Office of Community Relations until mid-summer, when it will be moved to Notre Dames new Jordan Hall of Science to become part of the permanent science displays that will be located throughout the main floor of the building.